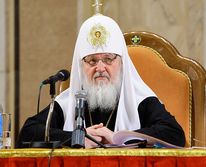 Moscow, October 31, Interfax – The latest events in Moscow’s Biryulyovo district show that only the forces seeking to destroy Russia will gain from further disregard of the opinion of the Russian majority, said Patriarch Kirill of Moscow and All Russia.

“The latest clashes in the Moscow Biryulyovo district demonstrated that a deaf ear turned by the authorities to the demands of people and the unwillingness to search for joint solutions to the problems of excessive migration, related crimes and the behavior of foreigners, which is sometimes impudent, are bringing the situation to a critical limit,” the Patriarch said at the opening ceremony of the 17th session of the World Russian People’s Council.

“If the position of the Russian majority is ignored further, only the forces seeking to destroy Russia and provocateurs on both sides, which never stop trying to set ethnoses and religions against each other, will gain from that,” the patriarch said.

“The prospect of alienation of Russians, primarily young Russians, from the state, state structures and business governance may be very dangerous,” he said.

“It may develop into a major factor of destabilization in the near future and endanger the fundaments of our civilization,” the patriarch said.

He disagreed with the opinion that Russia was for Russians only.

“But we will never agree with those who want Russia [to be a country] without Russians, devoid of its ethnic and religious face and the feeling of solidarity and unity. This scenario is fraught with catastrophic consequences not only for our country but also for the entire world,” the patriarch said.

In his opinion, Russia “is a country-civilization” with its own values, public development laws, social and state model and system of historical and spiritual coordinates.

In addition, Russia has a special experience of “a multi-polar and plural order and a tradition of self-restriction, which is so important in the face of the approaching deficit of resources and an acute ecological crisis,” the Church head said.

Patriarch Kirill believes there are forces, which support everything that may weaken and divide the Russian people and disorient their worldview and morals. “It seems the worst fear of these forces is the genuine revival of the Russian civilization based on the belief connected to life and socially significant action,” he said.

“The symphony of ethnoses, which makes our civilization unique, is impossible without Russians. The dialogue between peoples, which is bound to bring harmony to inter-ethnic relations, will not reach its goal without Russian voices and the Russian factor. The Council is a rather mature and influential organization to represent the Russian people on inter-ethnic debate floors,” he stressed.