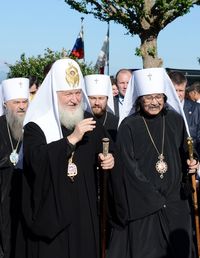 Tokyo, September 17, Interfax – Dozens of Russian expatriates accorded a warm welcome to Patriarch Kirill of Moscow and All Russia, who visited the Russian Orthodox Church’s embassy parish in Tokyo on Sunday.

After conducting a service at the Church of St. Alexander of the Neva, Patriarch Kirill said that, “a parishioner’s last will has been fulfilled and an Orthodox church was dedicated in Tokyo four years ago after 40 years of incessant work.”

“I remember how excited all of us were as the church was being sanctified and prayers said. Many of you remember the entire drama, which only proves that the truth is always right and that God hears the righteous prayer. This church is an example that must edify us all,” he said.

“The deeds of truth, the firmness of conscience and the fervent power of prayer” are the binding condition of victory and triumph over the most dramatic trials,” the Russian Patriarch said.

“May your Christian life go this way,” he said.

Patriarch Kirill presented an Order of St. Nicholas of Japan (Kasatkin), the founder of the Russian Orthodox Church in Japan, to the archpriest of the church, Nikolay Katsyuban, in recognition of his role as a missioner.

On September 12 2008, Patriarch Kirill, then Metropolitan of Smolensk and Kaliningrad, dedicated the Church of St. Alexander of the Neva, built on a land site, donated by parishioner Susanna Kravtsova in her last will.

The Moscow Patriarchate’s embassy parish in Japan currently includes the St. Sofia Convent in Sanmu, the churches of St. Nicholas and St. Alexander of the Neva in Tokyo, the chapel of St. Alexander of the Neva in Yokohama , the Chapel of St. Nicholas of Japan at the Russian military cemetery in Nagasaki and a parish in Hitachi.

According to Japan’s Immigration Service, 7,801 Russian citizens and several thousand Russian-speaking persons resided in Japan on a long-term basis as of the start of 2011. The natural disaster that hit Japan in March 2011 led to an intensive outflow of foreign nationals. The Russian community has shrunk to 5,000.

About half of the Russian expatriates, permanently or mostly residing in Japan, are members of Japanese families.