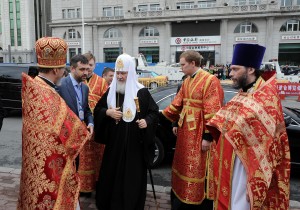 On May 14, 2013, Radonitsa, the day of the joy of the Resurrection when the memory of the dead is celebrated after Pascha, His Holiness Patriarch Kirill of Moscow and All Russia celebrated the Divine Liturgy at the church of the Protecting Veil in Harbin.

There were a great many Orthodox Chinese and Russian-speaking compatriots, but not all of them had an opportunity to enter the church. Upon his arrival at the church, His Holiness came up to believers who gathered in the street and talked to them and bestowed on them his primatial benediction.

Among his concelebrants were Metropolitan Hilarion of Volokolamsk, head of the Moscow Patriarchate’s Department for External Church Relations, Bishop Sergiy of Solnechnogorsk, head of the Moscow Patriarchate’s administrative secretariat, Archpriest Nikolay Balashov, vice-chairman of the Department for External Church Relations, Archpriest Dionisy Pozdnyaev, rector of the church of Ss Peter and Paul in Hong Kong, Archpriest Sergiy Yakut, dean of the Vladivostok diocese’s second district, and Rev. Sergiy Voronin, rector of the church of the Assumption at the Russian embassy in China.

The church was prepared and renovated by the Diocese of Vladivostok, whose priests also helped to take confessions from those who wished to take the Holy Communion.

The liturgy was celebrated on the corporal, which used to be in the church of Our Lady of Tabyn in Beijing. It is signed by Archbishop Victor (Svyatin) of China and Beijing, head of the 20th Russian Orthodox Mission in China. The choir of the New Monastery of the Saviour in Moscow sang, and the Holy Gospel was read in Church Slavonic and Chinese.

Among the worshippers were Russia Ambassador A. Denisov, V. Legoida, head of the Synodal Information Department, and S. Paltov, Russian general consul in Shenyang. During the Litany of Fervent Supplication, a prayer was lifted up for the victims of the flood in China.

During the service, liturgical mentioned was made of the dead archpastors, pastors and lay people of the Russian Orthodox Mission and the Chinese Autonomous Orthodox Church.

After the Divine Liturgy, the Primate of the Russian Orthodox Church addressed the clergy and numerous faithful, noting that Radonitsa is the day when the dead are remembered after Pascha. Besides, due to the fact that in 2013 the Victory Day fell on the Bright Week, a special annual commemoration of the dead warriors who died for the faith, the Motherland and the people and all those who were killed during the Great Patriotic War was made on the Radonitsa Day.

Speaking about the divine service celebrated in the church of the Protecting Veil in Harbin, His Holiness Kirill said in particular,

‘We prayed in the first place for those who have sown the seeds of Orthodoxy in China, who have remained faithful to our Lord and Saviour. In 1993, I had an opportunity to come to Harbin. Father Gregory Ju was still alive then, and he told me about this church and the Orthodox community in Harbin. I believe a considerable part of the Orthodox Chinese, who worshipped today, were very young people or even children at that time. I would like to thank you all, dear Chinese brothers and sisters, for having preserved the Orthodox faith despite the difficult situation. After Father Gregory died, there have been no permanent priest in this church, and in spite of it, you would gather together for prayer and support your community and your parish.

I have come to China to pray together with you, to meet with the country’s leaders and those who are responsible for religious life. We felt a special tie during the liturgy. I prayed to the Lord that He may show mercy for Russia and China, that peace and well-being, friendship, cooperation, and mutual support may strengthen relations between Russia and China. I also prayed for the blossoming of the life of the Chinese Orthodox Church as a Church which has professed faithfulness to our Lord and Saviour for long decades’.

Speaking about the Reading of the Gospel of the day, Patriarch Kirill said in particular that ‘the light came into the world’ (Jn. 3:19) so that in this light, people could distinguish between truth and falsehood, between good and evil. ‘They can do it because God has instilled conscience in our nature as an amazing instrument which works in the same manner both in the soul of a Russian and a Chinese and the soul of any other. God came to the world to strengthen human conscience so that nothing could darken it. And then, living by conscience, people will fulfil divine laws, both believers and non-believers, as it happens that non-believers also turn to their conscience and moral law’.

Speaking about his meeting with the PRC Chairman Xi Jinping, Patriarch Kirill noted that they agreed that traditional Chinese culture preserved many values characteristic of the Christian culture as well. ‘And it means that there is a common ethic foundation, a common basis for life and cooperation. I am confident that China and Russia will preserve this foundation and manifest their power to the world – the world in which these notions are obscured’.

Harbin, His Holiness said, has a special place in our hearts. It is directly related to Russia in its history and culture. It is the place where the greatest number of the Chinese Orthodox people lives. Addressing both the Chinese and Russian faithful, who come to Harbin in large numbers, among other thing, for the medical treatment of their children there, His Holiness invoked God’s blessing on all of them and the Orthodox community of Harbin and the whole city. ‘May He grant his blessing upon Russia and China so that our people may live in friendship and prosperity’, he said in conclusion.

As a token of the Patriarchal service in Harbin, the Primate of the Russian Church presented the church of the Protecting Veil with the Gospel for the communion table and the liturgical Apostolos.

The parishioners greeted His Holiness Patriarch Kirill. Speaking on behalf of the community, the warden Catherine Uy Shun said, ‘We have eagerly excepted your coming and can assure you that we will keep this church forever’.

The community presented Patriarch Kirill with canvasses executed in traditional Chinese manner, bearing the images of the church of the Protecting Veil in Harbin and roses and a quotation of the Gospel from Matthews.

After that His Holiness had a talk with children who came to Harbin for medical treatment and blessed them.

All those present at the service received small icons of the Risen Christ.

Most viewed articles
Faith and Moral Freedom82
The Trap of Religiosity82
Patriarch Kirill: “The Memory of the New Martyrs will Help Us to Be Faithful to Christ amid Modern Temptations”80
Bishop Nicholas of Manhattan visits Holy Cross Monastery in West Virginia76
Lord, Save Me!66
Patronal Feast Celebrated in St. Anna Convent in Vashkivtsi43
Condolences of Patriarch Kirill over the death of believers in the fire that broke out in Abu-Seifein Church in Cairo36
25 Years of Help: the Ship-Church Goes On its 25th Voyage to Distant Villages25
St. Tikhon Church to host Liturgical Music Symposium in October 202225
Most popular authors
Pravmir.com team285
Archpriest Michael Gillis82
Vasileios Stoyiannos82
Fr. Theodore Stylianopoulos66