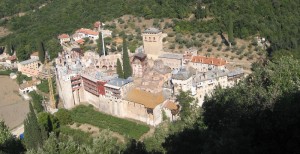 On June 6, 2013, His Holiness Patriarch Kirill of Moscow and All Russia, accompanied by a large delegation of church and state officials, visited Hilandar Monastery.

At the Hilandar Church of the Presentation of Our Lady, Holiness said a thanksgiving at the wonderworking Icon of Our Lady of the Three Hands.

After the thanksgiving, the abbot of Hilandar Monastery, Archimandrite Mefodije, addressed Patriarch Kirill noting that since the time of Tsar Ivan IV the Russians have brought many gifts to Hilandar and have always given it the necessary support. The monastery still keeps old tsars’ deeds. And when a fire damaged many monastery buildings in 2004, funds for their restorations came, among others, from Russia. He also said that in various times there were Russian monks in the Hilandar monastic communities.

Since old times, the abbot said, Hilandar monks used to bring shrines for veneration in Moscow, among them a replica of the wonderworking Icon of Our Lady of the Three Hands, which was brought to Moscow in 1661 at the request of Patriarch Nikon. It was lost during the time of persecution against the Church, and in 2011 he had to bring a new copy in place of the lost one.

In his response, His Holiness Kirill pointed to significant intersections in the history of Russian and Serbian monkhood, recalling that St. Sava of Serbia, the founder of Hilandar, began his monastic journey in the Russian Monastery of St. Panteleimon on Mount Athos.

Serbia and Russia have always been together in the hardest of times, he said. ‘Today we are enduring a tragedy of Kosovo and Metohija, the spiritual center of the Serbian Orthodox Church. It is so important therefore that Hilandar prays for the Serbian people’, he said.

The Primate of the Russian Church thanked the Hilandar abbot and monastic community for bringing a copy of the Icon of Our Lady of the Three Hands on the occasion of the 350th anniversary of the bringing of the original copy of the wonderworking icon, which was irretrievably lost after the 1917 Revolution.

His Holiness presented Archimandrite Mefodije with a pectoral cross and Hilandar with an Icon of Heavenly Queen of Kasperovo.

His Holiness also saw the St. Sava Well and, having scooped up some water by a bucket, washed his face. He also saw the St. Symeon Vine and the monastery’s museum with its icons dating back to the 13th century.