On 26 November 2013, His Holiness Patriarch Kirill of Moscow and All Russia met with H.E. Ismail Shafeeq Mohsen, Ambassador Extraordinary and Plenipotentiary of the Republic of Iraq to the Russian Federation. 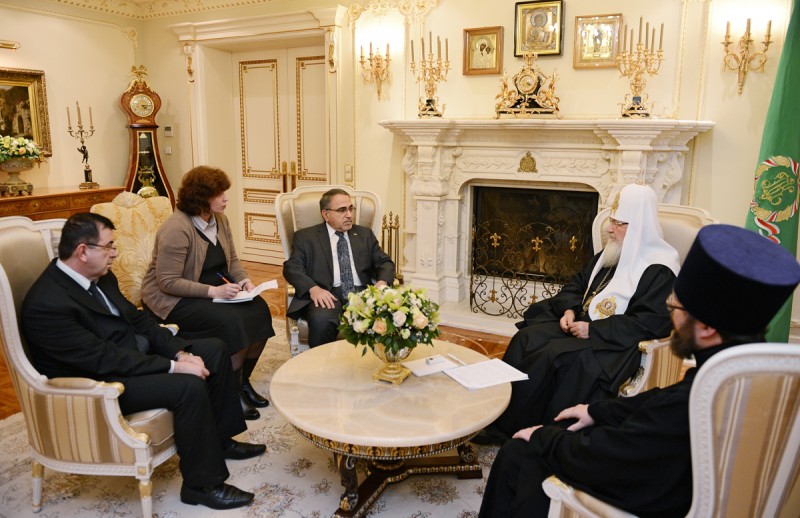 They were joined in the meeting, which took place at the Patriarchal resident in St. Daniel’s Monastery, by Mr. Monadel Akef Hammoudi, counsellor of the Iraqi Embassy, and by archpriest Sergiy Zvonarev, DECR secretary for far abroad countries.

The Primate of the Russian Orthodox Church said that Russia and Iraq had a good and long history of relations, which ‘have been intensively developing since 1958 after certain changes, also in historical science, which is close to me and to people having the similar philosophy of life. I recall expeditions from the Russian Academy of Sciences to Mesopotamia, the place of the dawn of civilization linked with the Biblical history. An agreement between our states signed in 1972 has provided legal background for successful development of our relations.’

His Holiness noted that the events in Iraq occurred after foreign intervention caused pain to the Russian Orthodox Church. ‘I visited Iraq not long before it and had an opportunity to get acquainted with religious life in the country in Baghdad and Mosul. I remember that one million and a half Christians lived in Iraq at that time, while now, as far as I know, there are only 150,000.’

Patriarch Kirill expressed his grave concern for the drastic decrease of Christian presence in Iraq. ‘We know that Christians are persecuted and many people had died only because they professed Christian faith. Many had to flee from Iraq on pain of death. This certainly has changed the cultural landscape of the country. We consider this a kind of a disaster to civilization as Christians and Moslems used to live in peace in your country. I have witness peaceful cooperation between the two communities.

‘We know that Iraq still suffers from terrorism and sympathize with the Iraqis. Innocent people are dying. We are deeply convinced that Iraq should remain a single state, that civil peace should be restored without any external influence because Iraq is a country with rich cultural traditions dating back to the dawn of human civilization. The people of Iraq are fully entitled to enjoy peace and justice.’

Discussed at the meeting were situation in Iraq and bilateral relations between the two countries, including inter-religious relations.

Ambassador Mohsen thanked His Holiness for an opportunity to meet and talk with him.

As to the history of his country, the Iraqi Ambassador underscored that religious communities in his country had lived in the atmosphere of tolerance and friendship for centuries. He said that the positions of Russia and Iraq on international relations are similar. For instance, Iraq supports peaceful settlement of the Syrian problem.

St the end of the meeting, His Holiness Patriarch Kirill wished Ambassador Mohsen success in his diplomatic service in Russia.