November 12, 2012, His Holiness Patriarch Kirill visited the Yad Vashem Memorial in Jerusalem. He attended the kindling of the eternal flame in the Hall of Names and laid a wreath at the Memorial. 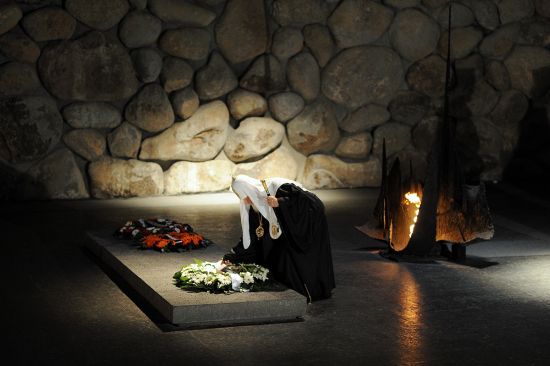 Present at the ceremony were hierarchs and clergy of the Patriarchates of Jerusalem and Moscow and Rabbi Arthur Schneier, president of the Appeal of Conscience Foundation.

During the ceremony, Patriarch Kirill said,

‘Here we remember the names of those who defended the Jewish people, who saved Jews from unavoidable death. In this place I would like to recall the Red Army soldiers who saved the world from the fascist plague. Along with the six million Jews who were killed, I would like to commemorate the twenty seven million Soviet citizens who fell defending the world from the fascist power and violence.

‘Yad Vashem is certainly a place of national grief for all the Jews but at the same time it is a place where we can commemorate and pray for all those who gave their lives to prevent the domination of the man-hating ideology which divided people on racial grounds, calling some first-rate while others second-rate people subject to elimination.

Source: Official website of the Department for External Church Relations