Patriarch Kirill: I will Pray to St. Nicholas Equal-to-the-Apostles Asking him to Help Open a New Page in Relations Between Russia and Japan 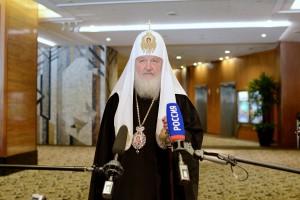 On September 18, 2012, before the conclusion of his primatial visit to Japan, His Holiness Patriarch Kirill of Moscow and All Russia answered questions from Russian and Japanese mass media.

Speaking about his meeting with Emperor Akihito of Japan, the Primate of the Russian Orthodox Church said that during the meeting with the Japanese monarch, an exchange of opinions took place, especially about the role and importance of the work of St. Nicholas of Japan ‘who founded a Church which exists to this day and which certainly constitutes one of the bridges uniting the people of Japan with the people of Russia on the level of heartfelt relations’.

‘There has developed however another cordial link conditioned by the participation of the Russian people, the people of Rus’, in the misfortune that befell Japan last year’, His Holiness continued, ‘When we sympathize with each other in sorrow or happiness, we become closer to each other. I have a feeling that the time has come for us to begin writing a new page in the history of our bilateral relations. It is certainly possible to overcome differences through a thorough study of history. History itself however teaches us that this way seldom leads to success: each side would say it is right, it is hurt more than the other, her stand is more just, and it always happens when the question is bilateral relations.

‘This dispute may go on for a long time, of course, but I think the time has come to turn the page and to realize that we live together, that we are tied by the same destiny, at least we live in the same region in which natural cataclysms and other circumstances, sad or joyful for both sides, may affect us in equal measure.

‘I will pray to St. Nicholas Equal-to-the-Apostles that he may help us write a really new page in our relations’.

Concerning the feat performed by St. Nicholas of Japan, His Holiness emphasized that the Japanese Church he founded in strict observance of the dogmata and canons of Orthodoxy is by no means a ‘foreign’ one while being an integral part of the Japanese people and bearer of their culture. The head of the Russian Church expressed the hope that this Church would help develop relations between the peoples of Russia and Japan.