Patriarch Kirill meets with delegation of the Romanian Orthodox Church 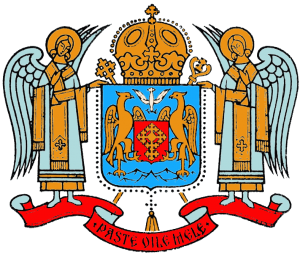 July 26, 2013 – His Holiness Patriarch Kirill of Moscow and All Russia had a talk with members of the delegation of the Romanian Orthodox Church who came for the celebrations marking the 1025th anniversary of the Baptism of Rus’. The delegation included Metropolitan Joseph of Western and Southern Europe and Deacon Eugene Rogoti.

The meeting took place on the train going from Moscow to Kiev, where celebrations were to continue.

Greeting the Romanian delegation, Patriarch Kirill noted that the celebrations marking the 1025th anniversary of the Baptism of Rus’ were of great importance for the whole Orthodox world. ‘Throughout history, Holy Rus’ immediately related to the Balkans, the Carpathian Mountains and the Danube lands. For this reason all these are in a sense the common Eastern Christian Orthodox world. We have common saints and have had common suffering and common joys’, he said.

Metropolitan Joseph conveyed to Patriarch Kirill a message of greetings from His Beatitude Patriarch Daniel of Romania. He also testified that ‘we are united by the common liturgical language and saints venerated both in the Russian and Romanian Churches’.

He conveyed the word of gratitude from Patriarch Daniel for the support the Moscow Patriarchate gave to the Romanian Orthodox Church in the case ‘The Good Pastor Trade Union versus Romania’ in which the Grand Chamber of the European Court of Human Rights recognized the right of the state to deny legal registration to anti-canonical structures within the canonical Church. Thus, the right of the Romanian Church was re-confirmed to order her internal life in accordance with canonical rules without interference of governmental bodies in behalf of anti-canonical groups.

The two patriarchs discussed various questions of the bilateral relations. They also considered a wide range of issues of common Orthodox significance and problems of inter-confessional cooperation and noted the similarity of the two Churches’ attitude to pressing problems of church life today.

In recognition of their work for the good of the Church and on the occasion of the 1025th anniversary of the Baptism of Rus’, Patriarch Kirill awarded Metropolitan Joseph the Order of St. Vladimir Equal-to-the-Apostles, 1st degree, and Deacon Eugene Rogoti the same order, 3s degree.

Most viewed articles
The Forgotten Virtue of Stability121
Utah Church Prepares, Welcomes All for Consecration92
His Beatitude Patriarch Theophilos III and bishops of the Russian Church Abroad attend a concert marking the 150th anniversary of the birth of Sergei Rachmaninoff in Jerusalem84
‘The post-Roe generation’: Pro-lifers set their eyes on heartbeat bills, chemical abortion bans83
Hierarch of the Jerusalem Patriarchate Speaks in Support of His Holiness Patriarch Kirill81
The Savior of the Hopeless, or Is It Possible to Be a Good Person and Not Be Saved?79
Supreme Court Overturns Roe v. Wade in Mississippi Abortion Ruling72
On the Shoulders of Giants18
Most popular authors
Pravmir.com team257
Hieromonk Gabriel121
Ryan Foley83
Alexander Tkachenko79
CBN News72
Archpriest John Moses (+2019)18