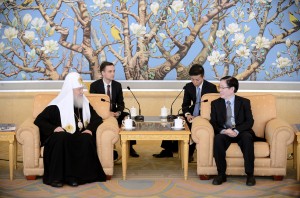 On May 10, 2013, His Holiness Patriarch Kirill of Moscow and All Russia met with the director of the Chinese State Directorate for Religious Affairs (SARA), Mr. Wang Zuoan.

The Russian Federation was represented by Russian Ambassador A. Denisov, Minister-Counsellor Ye. Tomikhin, Mr. S. Melnikov, executive secretary of the Presidential Council for Cooperation with Religious Associations, and staff members of the Russian embassy.

From the Chinese side, there were Mr. Jiang Jianyong, SARA deputy head, Mr. Lu Jinguang, director of the SARA 4th Directorate, Mr. Guo Wei, head of the SARA international department, and other officials.

‘We are aware that the Russian Orthodox Church not only has a long history but also enjoys the broadest authority among the Russian public. The Russian Orthodox Church plays an essential role in almost all the aspects of social life in Russia and above all in the religious life of the Russian people and actively stands out for the development of dialogue between various cultures and civilizations. We give a high value to it’, Mr. Wang Zuoan said welcoming the high guest.

During the talk, the parties discussed the role of religious organizations and the importance of traditional religious values in the societal life of the two countries, the current state of affairs in the dialogue between the Russian Orthodox Church and the Chinese State Administration for Religious Affairs.

Besides, a positive assessment was given to the Memorandum of Understanding signed in 2010 between the Presidential Council for Cooperation with Religious Associations and the SARA. The side also outlined prospects for further cooperation and considered today’s situation of Orthodoxy in China.

Mr. Wang Zuoan thanked Patriarch Kirill for the assistance the Russian Orthodox Church gave in the theological training of Chinese students. He expressed confidence that the visit of Patriarch Kirill would ‘become a new start in cooperation between Russia and China in the religious sphere’.

In conclusion of the talk, the Primate of the Russian Church invited Mr. Wang Zuoan to visit Russia.