On August 29, 2012, His Holiness Patriarch Kirill of Moscow and All Russia had a talk with Japan’s ambassador to Russia, Mr. Tikahito Harada, in his official residence in Moscow.

Before the meeting, Patriarch Kirill signed the Honorary Guest Book, noting that his visit to the Japanese diplomatic mission was one of his first visits as head of the Russian Church to representations of foreign states in Moscow. 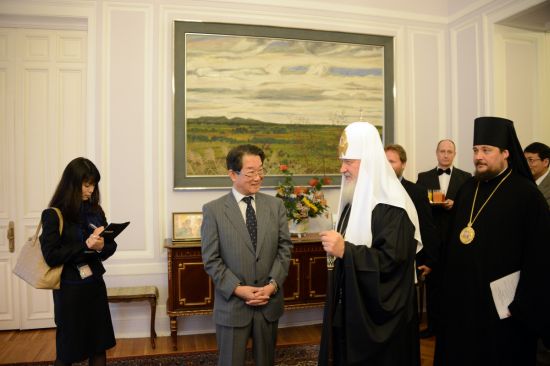 During the talk they discussed the development of relations between the Russian Orthodox Church and Japan including the Patriarch’s planned visit to the Japanese Orthodox Church.

His Holiness is expected to visit Japan from September 14 to 18 at the invitation of Metropolitan Daniel of Tokyo and All Japan. The visit is timed to the centenary of the blessed demise of St. Nicholas of Japan Equal-to-the-Apostles. It will be a part of the patriarchal visit to Siberia and the Far East. Along with Japan, he is to come to the Metropolises of Krasnoyarsk and Primorye.