His Holiness Patriarch Kirill of Moscow and All Russia met with Mayor of Riga Nil Ushakov at the Throne Hall of the Church of Christ the Saviour.

Welcoming the high guest, Patriarch Kirill said, ‘We are delighted to see in your person a Russian-speaking man who is mayor of the Latvian capital city. You are Orthodox, and this opens an opportunity for closer relations’. 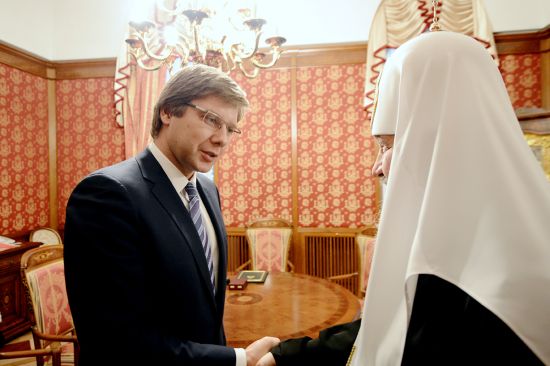 Mr Nil Ushakov thanked His Holiness for the opportunity to meet. ‘The present Riga Duma has exerted every effort to build relations with all the Christian confessions. In Riga, there is a special council which includes all the Christian confessions’, he said. Mr. Ushakov also said that Riga’s city authorities maintained good relations with all the traditional confessions represented in the Latvian capital, including Orthodox, Lutheran, Catholic and Old Belief. In one of the districts, he continued, an Orthodox church is being built on private donations, and the city authorities have given their assistance in this construction. He expressed hope that the construction would be completed this year. He also stressed that the Latvian Orthodox Church carried out an extensive social work in the city. For instance, a soup-kitchen has been arranged in one of the monasteries.

Patriarch Kirill expressed satisfaction at the level of relations existing today between the Latvian Orthodox Church and the Latvian Government. ‘The adoption of a law on the Latvian Orthodox Church has helped the Church to take an active part in the spheres of social life in which it would be difficult for her to participate without such a law. I mean the work with prisoners and the work in the army. There is also an opportunity now to study the Christian tradition in school. And all this has been introduced without any public conflict. In a sense, this law is an example to be followed by other countries in the post-Soviet space’, he said.

The Primate of the Russian Church also mentioned problems concerning the status of the Russian-speaking community, saying, ‘Forty four per cent of those who live in Latvia consider Russian to be their mother tongue, but officially it is still a foreign language. It is a unique case in the world practice. As long as this situation does not change, we will express our concern for it. There is a similar situation with regard to a great number of people who are still called ‘stateless’. It is a wound on our body, and as long as it hurts we cannot forget it. Nevertheless, there are positive processes taking place in Latvia. We will pray and work, of course, so that these difficult problems may be solved’.

Patriarch Kirill thanked Mr Ushakov for his position with regard to the language. He stressed that a solution of the linguistic problem would not weaken the Latvian identity or make any damage or provoke conflicts. ‘On the contrary, it will promote Latvia’s international standing and sympathy from her nearest neighbours. It will also help strengthen social peace and stability in society’, His Holiness said.

Patriarch Kirill welcomed the decision to close several neo-Nazi websites and expressed hope that neo-Nazism as a danger not only to the Latvian society would not develop. ‘A renewal of Nazism in any form is a very painful matter for all peoples who experienced the horrors of World War II’, he said.