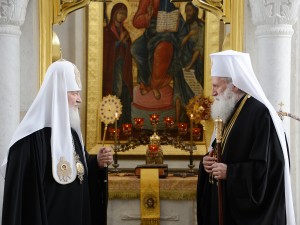 Welcoming his guest, Patriarch Kirill reminded him of the celebration which took 25 years to mark the Millennium of the Baptism of Russia: ‘It was a turning point in our history because precisely after the Millennium, profound changes took place in the life of the state, society, our people and the Church’.

Having expressed satisfaction with the state of cooperation between the two Churches, Patriarch Kirill pointed to pilgrimage as another step in the development of this cooperation: ‘Today most of the holy places in Rus have been restored, with active liturgical and monastic life resumed there. It could have a great spiritual importance for the Bulgarians who come to Russia to satisfy, among other things, their interest in Russian culture and history’.

Both sides agreed that the number of Bulgarian students trained in Russia could be increased. ‘We could offer them training for a Master’s degree. We have similar agreements with the Churches of Greece, Serbia and Poland. Under exchange programs, our students could be trained in Bulgaria’.

Patriarch Kirill expressed his support for the Bulgarian Church’s initiative to introduce a religious education course in Bulgarian schools. Speaking about a similar course in Russian schools, he said, ‘The education is built on an alternative basis to give Orthodox Christians, Muslims, Jews and Buddhist an opportunity to study the basics of their own faith, because these religions are traditional for Russia as they have existed here for a thousand years. This course also gives non-religious people an opportunity to study the basics of secular ethics. By God’ mercy, this course have been introduced in Russia without provoking any interreligious or inter-ethnic problems’.

Patriarch Neophyte stated a growth in people’s interest in religious education in Bulgaria. Most of the educated public, he said, support the Bulgarian Patriarchate in its desire to introduce a study of the basic knowledge of religion in their general education system.

Patriarch Neophyte spoke about the joyful opportunity for him to perform a ceremony of laying the foundation stone for a church of St. Cyprian the Metropolitan of Kiev.