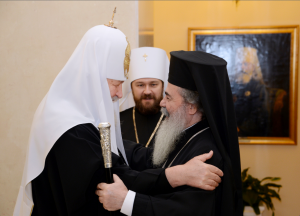 July 23, 2013 – His Holiness Patriarch Kirill of Moscow and All Russia met with His Beatitude Patriarch Theophilos III of Jerusalem, who has brought a delegation of the Orthodox Church of Jerusalem to the celebrations marking the 10th anniversary of the Baptism of Russia. They met at the patriarchal and synodal residence in the St. Daniel Monastery in Moscow.

Patriarch Kirill welcomed Patriarch Theophilos at the entrance to the Chapel of All Saints Who Shone Forth in the Russian Land. Addressing Patriarch Theophilos in the chapel, Patriarch Kirill said in particular, ‘Contacts between heads of Local Churches and fraternal relations between them are of great importance for preservation of the unity of Orthodoxy and our cooperation. Your recent peace visit has left a deep mark in the life of the Russian Church and our people. It was excellently covered by the mass media including central TV channels. There were many positive responses but, along with the response of the press and society, what is important is the response of our pious people who feel special love for the Church of the Holy City of Jerusalem’.

Speaking about the 1025th anniversary of the Baptism of Russia, His Holiness Kirill underlined, ‘It is a very important date in our history. Twenty five years ago, your late predecessor took part in the celebrations devoted to the Millennium of the Baptism of Russia. At that time, all the participants in the celebrations could feel that something new was happening in the life of the Soviet Union. Nobody knew where the country was going to and what would happen to the Church, but people had great hopes. And in spite of the fact that the Church was under control and was not free at that time, the celebrations resulted in a tremendous manifestation of the faith that lived in secret in the depths of our people.

‘Twenty five years have elapsed. These have been very difficult but at the same time beneficial years in the life of our Church. And we thank God for all that has happened in this time. Our episcopate and our people fervently wished that we lift up this gratitude to God together with primates of Local Churches, because we are one Church and our division is theoretical’.

Speaking about the future, Patriarch Kirill said, ‘We still have to do much in the vast lands of Holy Russia. There are tremendous tasks before us, perhaps more complicated than those we have managed to fulfil for the last 25 years. I mean the real inchurching of people so that the faith may become an important part of the life of each who was baptized in Orthodoxy. This presupposes an enormous program not easy to carry out. Therefore, we all need devoted directions. That is why it is important that we as heads and representatives of Local Orthodox Churches should come together today so that we may receive support of Orthodox Churches and their prayers’.

Patriarch Theophilos, on his part, thanked Patriarch Kirill for the warm welcome accorded him in ‘the land of martyrs’. ‘We are feeling special joy and trepidation because our recent peace visit is still fresh in our memory, because we witnessed the high spirituality of the Russian Orthodox Church; we saw her in her development and were introduced to her social work’, he said.

His Holiness Theophilos also said he was greatly impressed by the constructive church-state relations and cooperation for the benefit of the society he witnessed during his visit to the Moscow Patriarchate.

He also mentioned the difficult situation in which the Church found herself in various parts of the world including the Middle East and stressed the great responsibility that lies on the Orthodox Church not only in pastoral but also social and other spheres.

‘Our message of hope is that we are not alone. Just as we share others’ joys and pains so other Orthodox Churches share our joy and pain’, he said, pointing out that people in the Middle East pin great hopes on Russia.

The two patriarchs also discussed bilateral relations between the Churches of Jerusalem and Russia, the development of pilgrimage and the state of inter-Christian relations.

They considered the situation in Syria and the Middle East as a whole, focusing on the problem of preservation of Christian presence in the Holy Land and the importance of Russia’s support in protecting Christians in the Middle East.

In conclusion of the meeting, Patriarch Kirill presented Patriarch Theophilos and members of his delegation with high awards of the Russian Orthodox Church ‘in acknowledgement of their work for the benefit of the holy Church and in connection with the 1025th anniversary of the Baptism of Russia’. His Beatitude Patriarch Theophilos of Jerusalem and All Palestine was awarded the Order of Glory and Honour, 1st degree.