Patriarch Kirill meets with vice-governor of Chinese province of Heilongjiang 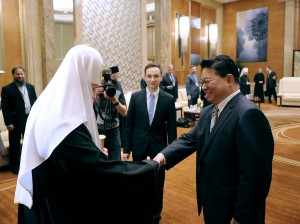 On May 14, 2013, His Holiness Patriarch Kirill of Moscow and All Russia met with the vice-chairman of the People’s Government of the Province of Heilongjiang, Mr Sunem Yunbo.

The Chinese side was represented by officials from the State Administration for Religious Affairs and the Heilongjiang Government.

In his welcoming speech, the vice-governor pointed to the significance the visit of Patriarch Kirill had for his province. He noted that the Divine Liturgy in the church of the Protecting Veil in Harbin was celebrated with a great gathering of people. Participating in it were both Chinese and Russian believers, some coming for the occasion from the Russian Far East, particularly from Vladivostok. ‘I am told that the faithful were very much moved by seeing you’, he said.

Your Holiness, we know’, he continued, ‘that the Russian Orthodox Church and you personally have given serious attention to the development of Orthodoxy in the province of Heilongjiang’, noting that students from China are trained in theological schools of the Russian Orthodox Church. ‘Using this opportunity, I would like to express great gratitude to you for it’, he said.

Patriarch Kirill testified that Harbin occupied a special place in the hearts of Russian people when they think about China. ‘No other city in China has preserved so many monuments linked with the Russian presence. Harbin was once a major center of the Russian Orthodox Church. There were 22 acting churches, two monasteries and two theological schools’, he informed the vice-governor.

‘And today Harbin keeps very important monuments associated with the Russian presence. Yesterday, with a special feeling I crossed the threshold of the church of St. Sophia and was introduced to an interesting exposition about old Harbin. For me, it is very moving to be in the place where many generations of Russian people prayed, assembled and felt to be a community’, Patriarch Kirill said, noting that he also noticed very many Russian mothers who came to Harbin for the medical treatment of their seriously ill children. ‘And for them, today’s liturgy was a great spiritual support’, he said.

‘I would like to recall’, he continued, ‘that in 1986 the church of the Protecting Veil was opened again and given to the Chinese faithful for worship. It was consonant with the new policy of openness initiated at that time by the Chinese authorities in their relations with the world. When I came to Harbin in 1993, I found the Chinese priest, Father Gregory Ju, still alive. He served there and told me much about the life of Harbin and the Orthodox people in Harbin’.

According to the church calendar, His Holiness said, it was the day when the dead were remembered. ‘In our country, we lift up special prayers for the warriors who defended the country and liberated the whole world from fascism during the Great Patriotic War. ‘Today in almost all the churches of the Russian Orthodox Church, soldiers are remembered who died defending the Motherland and the world from Nazism. We know that our soldiers died in China too. We prayed today for them and for Chinese soldiers who gave their lives for the freedom of their homeland’.

His Holiness told Mr. Yunbo that he was approached by a large group of Russians asking him to provide for a priest to celebrate Easter and Christmas in Harbin. ‘I would like to ask you as well as the State Administration for Religious Affairs to grant this request’, he asked the vice-governor, ‘I was especially moved by young mothers with children in wheelchairs. They asked me with tears in their eyes to arrange for a priest to serve at least two times a year’.

Pointing to the growing flow of Russian tourists to China, Patriarch Kirill said, ‘When Russians come to China, they go sightseeing, of course, and visit various churches. But Russian Orthodox churches in Harbin occupy a very special place. It is a real historical religious bridge between our nations’.

His Holiness drew the attention of the vice-governor to the importance of the religious factor in the development of good-neighbourly relations between the two countries, especially between the Chinese Province of Heilongjiang, Harbin and the Russian Far East. ‘If the heart of the Russian is to be gained, take him to Harbin and show him Orthodox churches. Few countries have such a tremendous potential for a positive influence on their neighbours’, he emphasized.

In conclusion, His Holiness said, ‘I would like to wish you personally and the city authorities success in your work, prosperity to Harbin and the Province of Heilongjiang, peace and well-being to China, so that hand in hand we could work defending the important ethical principles common for our two nations. I believe the influence our powers on the world may be decisive for the future of the entire humanity’.