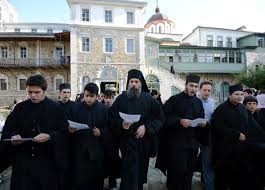 From the old Xilourgou hermitage His Holiness Patriarch Kirill and his party went to the St. Andrew Hermitage, where they were welcomed by the head of the hermitage, Archimandrite Ephrem, the brethren and the teachers and pupils of the Athoniada school functioning within the schete.

At St. Andrew’s, His Holiness celebrated a thanksgiving, after which Father Ephrem greeted him and, on behalf of the monastic community, presented with an epitrachelion, omophorion and liturgical cuffs.

Speaking about the history of the schete, Patriarch Kirill noted, ‘Among those who contributed to the monastic life here were Russian Athonites. Among them Father Vissarion and Father Varsonofy, who acquired a cell in Vatopedi monastery, well-known Russian religious writer A. Muravyev, Father Theodorite, in whose time St. Andrew’s was laid, Father Innokenty (Sibiryakov), who donated his entire fortune for construction of St. Andrew’s. Just as the whole Athos, this schete experienced its ups and downs… It happened so that for political reasons in the later 20th century no more men could join the monastic community, and when the last monk died, nobody could come in his place’.

The Russian Orthodox Church did not remain indifferent to the plight of Russian Athonites and sought to support the monastic life in the St. Andrew schete, Patriarch Kirill said. ‘My predecessor, the late Patriarch Alexy II, was very much distressed to see this place deserted; whereas I can point with satisfaction to the revival of the monastery. The liturgy has been resumed; the buildings are gradually put in order; the schete becomes habituated by monks among whom there are natives of the countries in the canonical responsibility of the Russian Orthodox Church’.

The Primate of the Russian Church also addressed the teachers and pupils of the Athoniada school accommodated in the schete’s facilities and wished them to grow in faith and to become aware of the beauty of Orthodoxy under the monks’ wise guidance.

His Holiness presented the schete with an Icon of Our Lady of Kasperovo. Then he had a talk with the brethren of the hermitage.