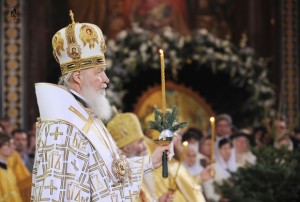 Orthodox Russians on Sunday will celebrate Christmas Eve. Christians are completing a four-week fast during which they confess and make communion. And on Christmas Eve they have special fasting – “until the first star” – in memory of how the Magi came first to the birthplace of Christ following the movement of the star in the sky. At present a candle in front of the altar, which is lit at the end of the Christmas Eve service at about noon, symbolises the star.

Patriarch of Moscow and All Russia Kirill will serve a liturgy at the Christ the Saviour Cathedral on Sunday morning and on the night to January 7. The festive Christmas service recalls the great event that marked the beginning of a new era for mankind. At the moment of birth of Godman God’s grace touched every person, every family line, and from that time the person has the opportunity to accept the gift.

The festive services will take place at night and in the morning in more than 30 thousand Russian Orthodox churches around the world. Christmas on January 7 is also celebrated by the Georgian, Serbian and Jerusalem Orthodox Churches.

The television broadcast of the night service in the Cathedral of Christ the Saviour will be traditionally transmitted by the two central TV channels – Channel One and Rossiya, as well as the Orthodox satellite channel Spas (it is included in the package of Corbina TV and can be viewed via the Internet). Candidate of Theology Nikolai Derzhavin will be the divine service commentator. The night service from the Kazan Cathedral in St. Petersburg will be broadcast by Channel Five.

Television and radio channels have prepared several Christmas programs. Radio Russia during the night air will talk about how the holiday is celebrated in different churches of Russia. Channel One after a night broadcast will show the premiere – “Saints of the Twentieth Century” about an archbishop surgeon who lived during the Stalin era, about the spiritual mother of Yuri Gagarin. The Rossiya TV channel will show during the night three Christian movies – “The Island” and “Conductor” directed by Pavel Lungin and “Miracle” by Alexander Proshkin. The Culture TV channel will show in the evening – the film “Nun,” which received the Grand Prix of the Rossiya documentary film festival.

The Orfei radio station in its evening program will broadcast the music by Jacobus Clemens, a fragment of the oratorio “The Childhood of Christ” by Hector Berlioz, and at midnight – “Liturgy of St. John Chrysostom” by Sergei Rachmaninoff. During the night and day on January 7 it will broadcast musical compositions devoted to Christmas by Tchaikovsky, Giovanni Pierluigi da Palestrina, Bach, Handel.

Russia’s Bolshoi Theatre during three days will stage a Christmas tale – “The Nutcracker” ballet. The Moscow House of Music on January 9 will open the Third International Christmas Festival.

Christmas is the greatest holiday of mankind. It is officially celebrated according to the old and new style in 34 countries with the total population of over a billion people.