As he continued his pilgrimage to holy places in Jerusalem, the Primate of the Russian Church visited the Convent of St. Mary Magdalene at the Garden of Gethsemane and said a prayer there to the holy martyrs Grand Duchess Elizabeth Fyodorovna and Sister Varvara.

The mother superior of the convent, Elizaveta (Schmelts), presented Patriarch Kirill with a portrait of the wife of Emperor Alexander II, Empress Maria Aleksandrovha, noting that she gave a great support to the work of Father Antonin (Kapustin), the founder of ‘the Russian Palestine’. 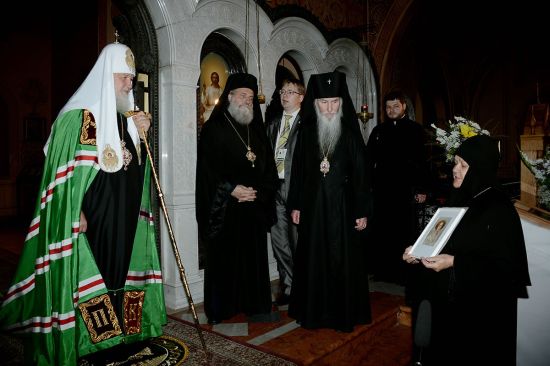 Addressing the archpastors, nuns and pilgrims, Patriarch Kirill said that the last time he had been in that church it looked desolated, but in recent years it was transformed ‘as the golden cupolas of the Convent of St. Mary Magdalene began to sparkle again over Jerusalem’.

‘Looking at this beauty… we cannot but recall the feat performed by those who laid the foundation for the presence of Russian holiness and Russian devotion here’.

It was Father Antonin (Kapustin), he said, who proposed to Grand Princes Sergey and Pavel, who came to Jerusalem together with Grand Prince Constantine, that a church and a monastery be erected there, and the royal brothers accepted it and expressed the wish that the church be devoted to their pious mother, Empress Maria Aleksandrovna.

In 1888, he continued, the church was consecrated in the presence of Grand Prince Sergey and his wife Elizabeth Fyodorovna, who was not yet Orthodox at that time. ‘And we know that she became Orthodox not only of necessity but also because of her beliefs. All that was to happen to her later pointed to the profundity of her faith with which she adopted Holy Orthodoxy’.

Elizabeth Fyodorovha did not choose an easy way during the 1917 Revolution. She stayed with her suffering people ‘who rose in rebellion against each other and God’. She suffered martyrdom at Alapayevsk in the Urals. ‘Later, by God’ mercy’ her honourable remains were taken through Siberia, the Far East and China to the Holy Land to rest here’, Patriarch Kirill said.

‘For a long time the Russian Church bore the stamp of terrible divisions, but by God’s mercy and through the intercession of the Royal Passion-Bearers the spiritual, canonical and Eucharistic communion of the parts of the Russian Church divided by human ill will has been restored… Many believed that the 1917 Revolution and the Civil War was the end of the world, the coming of Antichrist, the end of history. One can imagine what our devoted ancestors felt seeing the destruction of churches, defilement of shrines, the triumph of the theomachist power who insulted people’s deepest religious feelings – the feelings which have always been inherent in our people. It seemed there was no deliverance. Later, it took only a few days to have the chains cast off and our Church was given an opportunity to unite and, most importantly, to bear witness to the inscrutable ways of Divine Providence.

‘Today our people, tempted by new attacks of godlessness based on a somewhat different ideology but having the same goal, face the risk of repeating the terrible mistakes of the past. Standing here we realize with special clarity how important it is not to repeat the same mistake, not to blaspheme holy places, not to destroy God’s cause which has been built by many generations in our Motherland’.

Patriarch Kirill thanked Archbishop Mark of Berlin-Germany and Great Britain for his concern for the part of the Russian Ecclesiastical Mission which is under the jurisdiction of the Synod of the Russian Church Outside Russia.

Source: Official website of the Department for External Church Relations