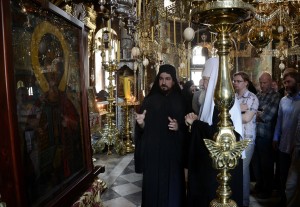 On June 6, 2013, His Holiness Patriarch Kirill of Moscow and All Russia visited Zograf, one of the oldest monasteries on Holy Mount Athos. He was welcomed at the gate by the abbot, Archimandrite Ambrose, and the monastic community.

After the prayer service, Archimandrite addressed His Holiness expressing gratitude to him for coming. He also thanked Russian believers for their support of the monastery and spoke about the veneration with which the monastic community honour St. Seraphim of Sarov.

In his response, Patriarch Kirill said that it was his first visit to Zograf. Kissing the miracle-working Icon of St. George, he said, he prayed for Moscow as the city protected by the saint.

Patriarch Kirill made a special mention of the fact that the Zograf monastic community stayed faithful to Orthodoxy ‘even to death’. An example to it is the feat of 26 martyrs who in the 13th century refused to join the unia and were killed for it.

He also mentioned the late Patriarchs Cyril and Maxim of Bulgaria and Pimen and Alexy II of Moscow who worked hard to keep the Slavic icon-lamps burning on the Holy Mount and to replenish the Slavic monkhood on Mount Athos.

His Holiness also said he prayed for the present Primate of the Bulgarian Church, His Holiness Neofit.

As a token of their common prayer, the Primate of the Russian Church presented the monastery with an Icon of the Most Holy Mother of the God.

Then His Holiness had a talk with the brethren. They presented him with commemorative gifts.