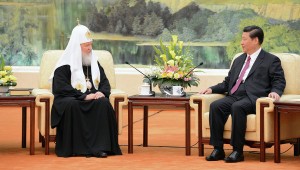 BEIJING, May 10 (RIA Novosti) – The head of the Russian Orthodox Church, Patriarch Kirill of Moscow and All Russia, has met with the Chinese President on the first day of his five-day visit to China.

The Chinese President Xi Jinping has called the head of the Russian Orthodox Church’s visit to the country an indication of the good relations the two countries today enjoy.

Patriarch Kirill’s five-day visit began on Friday and is set to include a series of meetings with high-ranking Chinese officials, including those responsible for religious affairs, and also members of the Orthodox community within China.

“You are the first Patriarch of Moscow and All Russia, and the first high-ranking religious leader from Russia to visit our country. This is clear testimony to the high-level of Russian-Chinese relations,” Xi Jinping said at the meeting with Patriarch Kirill in Beijing.

President Xi also said he was satisfied with the results of his visit to Moscow in March, during which he and President Vladimir Putin discussed a possible visit by the Patriarch to China.

Patriarch Kirill stressed that Russia greatly values the fact that President Xi chose the country as the destination for his first foreign trip, saying that this is “testimony to the special relationship between Russia and China which has developed in recent years.”