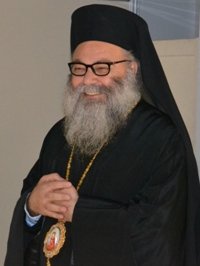 His Beatitude Patriarch John X of Great Antioch and All the East sent a message to His Holiness Patriarch Kirill of Moscow and All Russia, in which he expressed his gratitude for the efforts that the Russian Orthodox Church makes to defend Christians in the Middle East.

In his letter, His Beatitude Patriarch John X mentioned the celebration marking the 1025th anniversary of the Baptism Russia, which was held in Moscow, Kiev and Minsk with the participation of the Primates and representatives of all Local Orthodox Churches, saying in particular, “I was… so happy to see the brothers gathering about the holy Divine Altar and praising the Author of Life, Our Lord Jesus Christ who blessed Russia and the Russian People and granted this great nation all his heavenly blessings to be a true and sincere witness of Christendom. The baptism of Russia is not only an historical event, but it is also a concrete and lived reality that all people and nations can “come and see” (John 1:46) and praise the Lord Jesus Christ.”

According to His Beatitude, “with deep feeling of respect and appreciation” he read the Statement by Heads and Representatives of the Local Orthodox Churches Assembled for the Celebration of the 1025thAnniversary of the Baptism of Russia. The main theme of the joint statement is the situation of Christians in the Middle East.

“I consider it my duty to raise an Antiochian thankful voice to support and share every word of the released statement,” Patriarch John’s letter reads. “Truly, Christians are persecuted and damaged in the Middle East, in the land of Jesus Christ. The salvation of Syria and of all the Middle East comes, as mentioned, through the logic of dialogue and peaceful political settlement. Extremism, fundamentalism and blind radicalism are the most great dangers which threaten not only the Christian presence, but the existence of the States and the peace of all the nations.”

His Beatitude Patriarch John X of Great Antioch and All the East expressed his wish to pay a brotherly visit to the Russian Orthodox Church and said in conclusion of his letter, “May Lord, Jesus Christ, the King of Peace give us His Divine Peace, grant you, the Russian Synod and the Russian People His heavenly blessings and bless the efforts of all the orthodox world to settle the peace in the Middle East and in all the world redeemed by the precious blood of our Savior.”

Most viewed articles
The Authenticity of the Vision of Christ in the Life of Saint Silouan103
How to Deal with Sin90
Epistle of the Council of Bishops of the Russian Orthodox Church Outside of Russia80
The Bulgarian Church Can Canonize Its First Patriarch59
“A New Creation” Through the Cross of the New Adam57
“The models par excellence are the great hesychast saints,” says Romanian Orthodox Bishop of Oradea51
Living with Cunning People11
Most popular authors
Pravmir.com team139
Archimandrite Zacharias Zacharou103
Archpriest Basil Ross Aden90
Priest Philip LeMasters57
Ștefana Totorcea51
Fr. Andreas Agathokleous11