Patriarch Pavle of Serbia Reposed in the Lord

His Holiness, Patriarch Pavle, is a unique phenomenon for our times; therefore, of course, it would be pointless to make him the measure for other patriarchs, just as it would be, for example, to make St Philaret the Merciful or St Alexei the Man of God the measure for the majority of contemporary laypeople. Everyone has his own standard and his own kind of podvig. It seems to me that one should simply rejoice that in our lifetime such a person was and is in the Orthodox Church.
admin | 15 November 2009

Today, on November 15, 2009, at 10.45 at the Military Medical Academy in Belgrade, after receiving the Sacrament, Archbishop of Pec, Metropolitan of Belgrade and Karlovac , Patriarch Pavle of Serbia reposed in the Lord. 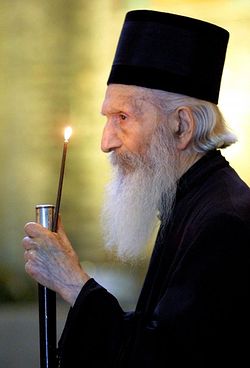 I have never personally seen Patriarch Pavle, although I have heard about him for a long time. I first visited Serbia in fall 2006. I very much wanted to see His Holiness, especially because, from what I knew, he was normally completely accessible. It was not that I expected to have an audience, but I hoped simply to look with my own eyes at a holy man of our time and receive his blessing, and this alone would be a joy. But this did not happen. In the fall of 2006 his health worsened, and in my later visits it grew still worse. I was clearly unworthy of seeing His Holiness, Pavle.

While in Serbia I heard many remarkable stories about him from trustworthy people, which I would like to share. His Holiness, Patriarch Pavle, is a unique phenomenon for our times; therefore, of course, it would be pointless to make him the measure for other patriarchs, just as it would be, for example, to make St Philaret the Merciful or St Alexei the Man of God the measure for the majority of contemporary laypeople. Everyone has his own standard and his own kind of podvig. It seems to me that one should simply rejoice that in our lifetime such a person was and is in the Orthodox Church.

It is well known that the Serbian Patriarch, even when taking up his high-ranking position, continued his ascetic podvigs and strove to live modestly – although for him this was all quite natural, without any deliberate affectation. He went around town by foot or took regular public transportation, among the throngs of people, was not acquisitive, and ate as little as the ancient desert fathers – simply because that was the way he was.

Mrs Jana Todorovic told me a story that concerned her sister. She was at a reception at the Patriarch’s for some reason. Discussing business, she happened to look at the Patriarch’s feet and was shocked at the sight of his shoes: they were old, had been torn and then repaired. The woman thought: “How shameful for us Serbs, that our Patriarch has to go around in broken shoes; couldn’t somehow give him some new shoes?” The Patriarch said joyfully: “Look at what good shoes I have! I found them near the garbage cans when I went to the patriarchate. Someone had thrown them away, but they are real leather. I darned them a little bit and, look, they can still serve a long time.”

Another story is connected with these same boots. A certain woman came to the patriarchate with the request to speak with the Patriarch concerning an urgent matter, about which she needed to speak with him personally. This request was unusual and she was not immediately admitted, but the visitor’s persistence bore fruit, and an audience took place. Seeing the Patriarch, the woman said with great excitement that that night she had dreamed of the Theotokos, who told her to take money to the Patriarch so that he could buy himself new shoes. Saying this, the visitor took out an envelope full of money. Patriarch Pavle, not taking the envelope, responded affectionately: “At what time did you lay down to sleep?” The woman, surprised, asked: “Well… around eleven.” “You know, I lay down later, around four in the morning,” the Patriarch responded, “and I also dreamed of the Theotokos, who asked me to tell you to take the money and give it to those who really need it.” He did not take the money.

Once, approaching the patriarchate building, His Holiness, Pavle, noticed many cars near the entrance and became interested in whose they were. He was told that these cars belonged to bishops. To this the Patriarch replied with a smile: “If they, who know the Savior’s commandment about unacquisitiveness, have such cars, just imagine what kind of cars they would have if there this commandment did not exist!”

Once the Patriarch was flying somewhere on a visit. While they were flying over the sea the airplane went into a zone of turbulence and began to shake. A young bishop who was sitting next to the Patriarch asked what he would think if the airplane were to fall. His Holiness, Pavle, replied calmly: “With regard to myself personally, I would take this as an act of justice: I’ve eaten so many fish in my life that it would be no surprise if they were to eat me now.”

It would not be a bad idea to cite a passage from a conversation between Nikolai Kokukhin and Deacon Neboisha Topolic:

“By God’s mercy we have such a spiritual pastor as His Holiness, Patriarch Pavle… He leads an ascetic life and is a living example of an evangelical pastor. He lives in Christ in the full sense of this word… As an Orthodox monk he fasts, that is, does not eat meat, and keeps a very strict fast on Mondays, Wednesdays, and Fridays… He serves the Liturgy every morning in a small chapel in the building of the patriarchate. There is no choir there, and only parishioners sing…

“He vests himself before the service and unvests after the service, he Confesses and Communes parishioners himself. He has worn the same riasa and cassock from the time of his tonsure to the angelic order (and this was fifty years ago). He does not replace them. He washes, irons, and mends them himself. He prepares his own food. Once he told me that he had made himself a pair of good boots out of women’s boots. He has all the instruments for fixing boots; he himself can fix any shoes. He frequently serves in different churches, and when he sees that a priest has a torn riasa or phelonion, he says to him: ‘Bring it, and I’ll fix it’… Being around such a person is a great benefit for the education of the soul, for spiritual growth.”

For all this, Patriarch Pavle is a doctor of theology (he received this before becoming Patriarch), and is the author of several books: a monograph on the monastery of St Joannicius of Devich and the three-volume To Clarify Certain Questions of Faith, several selections of which have recently appeared in Russian translation.

Patriarch Pavle has repeatedly requested to be retired for reasons of health, but the last Council of Bishops decided that he will remain the spiritual head of the Serbian Church until his very death. Patriarch Pavle was very close to the people, and the people loved him very much. He is a unique figure even for the Serbian Church and the next Patriarch, of course, will be different. 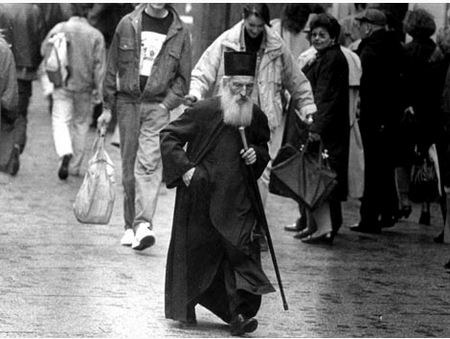 He is very accessible. When his sister was alive he frequently walked to her house by foot. He in general like to go about by foot, without an escort. Anyone can approach him and speak with him. He receives visitors every day at his residence. People go to him with their needs and their small questions, and he finds a comforting word of consolation for each of them.

He gets up very early and, when everyone is still sleeping, he serves the Liturgy, praying for the entire Serbian people. All Serbia is in his heart. He is small in stature, but great in spirit. He has thin fingers, but when he forms these fingers into the sign of the cross legions of demons flee; he wears thin cotton vestments, but beneath these vestments is hidden the soul of a brave warrior. The people say: “This is our angel, who protects and defends us.”

Give rest, O Lord, in the dwelling of the righteous, your servant Holy Patriarch Pavle!