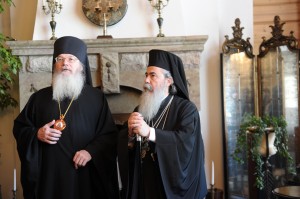 On May 28, His Beatitude Patriarch Theophilos III of Jerusalem, who is on an official visit to the Russian Orthodox Church, arrived at the Valamo Monastery of the Holy Transfiguration.

His Beatitude’s delegation, who flew in by helicopter from Kronstadt, were welcomed by the abbot of the Valamo Monastery, Bishop Pankraty of Troitsk, and the director of the Light of Valamo Orthodox cultural and educational center, Hegumen Mefody.

His Beatitude greeted Bishop Pankraty with the Paschal exclamation and told him about his participation in the consecration of the Cathedral of St. Nicholas in Kronstadt, noting that ‘it was a double feast for Kronstadt and for the whole Orthodox world’.

Later that day, Patriarch Theophilos and his delegation visited the Hermitage of Our Lady of Smolensk. Talking to the brethren, His Beatitude said, ‘Today we should not only seek to increase the number of the faithful but also need examples of living asceticism because it is a way and path that brings one who recognizes the mystery of resurrection closer to God’.

At the reverence cross, Patriarch Theophilos and his delegation said a prayer for all the dead soldiers.