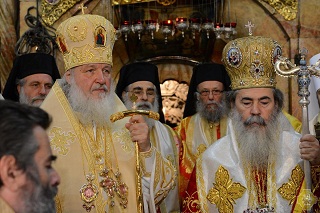 His Beatitude Patriarch Theophilos of Jerusalem sent in November 2012 a letter to His Holiness Patriarch Kirill of Moscow and All Russia, expressing solidarity with the Russian Orthodox Church and her Primate in connection with a number of anti-church actions which had taken place in Russia.

The letters states in particular that having learnt from the mass media about the abuse of shrines and manifestations of violence against churches and clergy ‘in the pious country of Russia’, His Holiness deemed it necessary to state the following: ‘We express our full support for the pious Russian people who have always shown their devotion including by frequent pilgrimages to the Holy Land and for their Chief Pastor, His beloved Holiness Patriarch of Moscow and All Russia’.