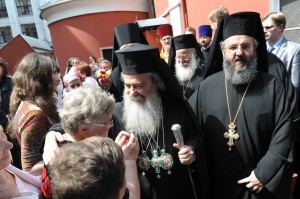 The high guest was welcomed at the entrance by representatives of Local Orthodox Churches at the Moscow Patriarchate as well as clergy and parishioners.

Archimandrite Stefan (Dispirakis), the dean of the representation, welcomed the guest with words: ‘Blessed is he who shares in the church communion with the most holy Church of Russia and who has come from the Holy City of Jerusalem and who enters today our Church of the Holy and Life-Giving Sepulchre of the Lord, which is in the center of Russia and in the heart of the devoted Russian people’.

Father Stephen noted that Patriarch Theophilos was connected with the church representation personally as ‘in due course he served here as representative of the Lord’s Holy Sepulchre and worked to strengthen relations between the old Patriarchate of Jerusalem and the great Moscow Patriarchate’.

Patriarch Theophilos thanked Father Stephan for the greeting and addressed those present, stating that he visited the Moscow Representation of the Patriarchate of Jerusalem with excitement and great joy. Speaking about the history of the church representation, he noted that the church, erected in the 19th century, was designed as a place for preparing pious Russian worshippers for a trip to the Holy Land. Besides, the representation church was a sojourn for representatives of the Patriarchs of Jerusalem who came to Russia to collect donations for the Brotherhood of the Holy Sepulchre.

The representation of the Church of Jerusalem ‘is a continuation here of the Holy Sepulchre’, he said, emphasizing, ‘I say it because the grace-giving flame has never died down in this land even during the time of persecution experienced by the Russian Orthodox Church when thousands of martyrs shed their blood here for Christ’.

‘This church representation is a link between the Brotherhood of the Holy Sepulchre, the Patriarchate of Jerusalem and the Russian Orthodox Church, as well as between the two Patriarchs’, His Beatitude said.

‘We are deeply moved’, he continued, ‘because for two years we used to serve here nourished by the spiritual food we shared with all those who loved Zion. The Representation Church gave an opportunity for those who served in it to come to know the soul of the pious Russia people and their contemporary history and thus to become participants in the suffering the Russian people experienced only for their faith in Christ crucified and risen’.

Noting that Local Orthodox Churches make up one Body of Christ, Patriarch Theophilos stated, ‘We are called to serve in this world threatened as it is with globalization and numerous challenges we as Orthodox face with regard to the Orthodox faith and morality. As the apostle says, For our struggle is not against flesh and blood, but against… the spiritual forces of evil in the heavenly realms (Eph. 6:12), that is, against the forces of darkness’.

‘We have come here with a peace visit at the invitation of our brother and concelebrant, His Holiness Patriarch Kirill of Moscow and All Russia. And as I already said to His Holiness the Patriarch: we have come not as strangers but as brothers to brothers’. Patriarch Theophilos expressed the hope that the Moscow representation of the Church of Jerusalem will remain a link between the Russian people, the Russian Church and the Orthodox people of Palestine and the Patriarchate of Jerusalem.