Patriarch Yazigi: Diversity in Syria is a point of strength 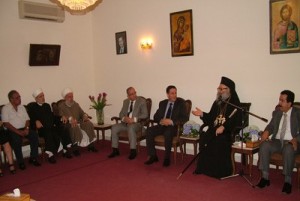 Lattakia, (SANA) –Patriarch John X Yazigi, the Greek Orthodox Patriarch of Antioch and All the East, said that Syrians are one big family united in their feelings, asserting that Syrians will always bear the message of peace and love.

Meeting official, religious, social, economic and civil figures in Lattakia on Tuesday, Patriarch Yazigi said that such meetings that bring together Syrian Muslims and Christians sends a message to the whole world and reflects Syria’s true image.

The Patriarch stressed that Syria’s diversity is a point of strength and that it cannot be an element of division, hatred and weakness, asserting that Syrians will preserve their long history of love and peace.

Participants in the meeting lauded Patriarch Yazigi’s patriotic and humane stances, wishing him luck in fulfilling his duties, affirming that such meetings show that Syria represents unity, love and compassion.

Chairman of Lattakia City Council presented Patriarch Yazigi with the key to Lattakia city and a model of the triumphal arc, one of the city’s landmarks.

Earlier on Monday evening, Patriarch Yazigi met university students from the Church of Archangels Michael and Gabriel, affirming during that meeting that youths represent the promising future.