Patriarchal condolences over demise of Cardinal Jósef Glemp, former Archbishop of Warsaw and Primate of Poland

His Holiness Patriarch Kirill of Moscow and All Russia expressed condolences to Metropolitan Jósef Michalik, President of the Polish Episcopal Conference, over the demise of Cardinal Jósef Glemp, former Archbishop of Warsaw and Primate of Poland. The text of the message is given below.

President of the Polish Episcopal Conference

Please accept my deep condolences over the demise of Cardinal Jósef Glemp, the former Archbishop of Warsaw and Primate of Poland. It was with sincere grief that I received sad news of the death of the renowned hierarch of the Roman Catholic Church in Poland whom I have known for many years. 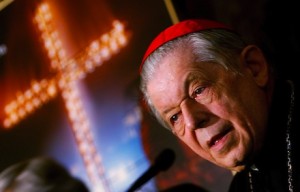 Cardinal Glemp had distinguished himself in the firm and steadfast faith in our Lord Jesus Christ and His triumphant Resurrection. This faith had helped him to overcome hard trials that befell him both during World War II and the years of the communist regime. The recognition of high authority of the Roman Catholic Church by contemporary Polish society is linked to His Eminence Cardinal Glemp who had dedicated all his energy to its spiritual and cultural revival.

Being inspired by the ideal of unity of Christ’s disciples, Cardinal Glemp had made an immense contribution to the reaching of mutual understanding between the Roman Catholic Church in Poland and the Russian Orthodox Church and to the development of good relations between them. I have warm recollections of our personal contacts and of our last meeting during my visit to your country in August 2012.

I pray to our Lord and Saviour Jesus Christ, the Conqueror of death, to rest the soul of the deceased and to console all the faithful of the Roman Catholic Church in Poland in sustaining their grievous loss.