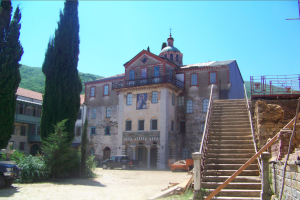 Among the participants in the celebrations was a Russian Orthodox delegation led by Metropolitan Rostislav of Tomsk and Asino. The delegation included Archbishop Onufry of Kharkov and Bogodukhov, Bishop Veniamin of Borisovka, and  Hieromonk Stefan (Igumnov), a DECR staff member.

Metropolitan Rostislav led the festive All-Night Vigil at the monastery’s main church, which lasted all night, and the Divine Liturgy. Along with the Russian delegation, his concelebrants included the abbot of the Xenophontos Monastery, Schema-Archimandrite Alexis, clergy of the St Panteleimon Monastery and pilgrims in holy orders. Hymns were sung in Greek and Church Slavonic.

Among the worshippers was Russia’s Consul General in Thessaloniki A. Popov and numerous pilgrims.

After the liturgy, a procession with the cross was held. Metropolitan Rostislav addressed the congregation at the monastery’s square, conveying to the monastic community and pilgrims a message of greetings from His Holiness Patriarch Kirill of Moscow and All Russia.

The festivities concluded with a fraternal repast with the participation of all those who visited the monastery that day.

In the evening, the brethren prayed for the late ktitors of the monastery and in the morning of August 10, Metropolitan Rostislav led the community in the Office for the Dead.