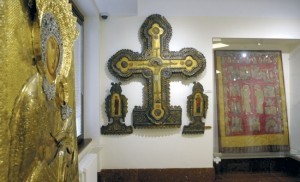 New permanent exhibition of the Museum of the Serbian Orthodox Church has been opened in the Patriarchal Palace in the presence of the Patriarch Irinej, Serbian president Tomislav Nikolic and Minister of Culture and Information Bratislav Petkovic, reported RTS.

Patriarch Irinej pointed to the long felt need to expand the museum, because in the old exhibition space there was only small part of the spiritual wealth available to churd exhibited.

In the SPC depots are numerous artifacts of the spiritual treasure of the Serbian people, of which some are from the 13th century, said Patriarch, and added that this is why it is important to find permanent solution to exhibit all the artifacts.

Patriarch has thanked to Serbian Government and the Ministry of Culture for allocation of the funds in order to make all the artifacts available to those who wish to see them.

President Nikolic has said that the multi-year renovation of the Museum of the Serbian Orthodox Church is completed, but that this is not the end and that “government is working hard to restore other museums” in Serbia.

“We expect with great anticipation that other significant museums join to those renovated – the National Museum and the Musem of Modern Art” in Belgrade, said Nikolic.

Nikolic added that the exhibition of the Museum of the SOC is equally devoted to century long development of the SOC, and to spiritual growth of the Serbian people in this region and that in this “unique treasury” will be sought and found answers to many historical and civilizational questions by the contemporaries and descendants.

“Although we belong to the group of old European people, we Serbs have not collected other nations’ creativeness by conquer. We do not only follow declarative Christian values that say stolen is damned. We did not want to steal by force, but we tried to save what is ours. By keeping what is ours, we meet out own past, we face the history, in order to understand the present,” said Nikolic.

Serbian president added that Serbian people has rich spiritual tradition that has withstood many trials and many centuries of suffering, but that wars, exile and pressures have not diminish its loe for the justice, freedom, homeland, friends and faith.

“If there was not the awareness of the importance of keeping historical treasures, good part of our mid-century past would remain scattered throughout Europe, or would be forever lost,” said Nikolic.

Minister of Culture Bratislav Petkovic has said that Serbian citizens will have a chance to see valuable relics and untold treasures which numerous monks have guarded for centuries and defended with their lives.

“Thanks to them, now we can be proud before the world,” said Petkovic.

In the permanent exhibition of the Museum of SOC in five rooms have been placed about 230 artifacts – icons, liturgical objects, portraits and prints, of which some date to 13th and 14th century.

June 2, 2013 BELGRADE – In the National Library of Serbia expert processing of extremely valuable collection of…