Persecution of Christians to hit record high in 2014, group claims

OTTAWA – The next year could bring record levels of religious persecution around the world, say international experts – especially for Christians. 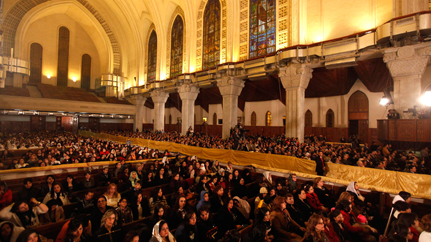 “I think in 2014, unless there’s a drastic change in the current trend, we’re going to continue to see things get worse,” said Isaac Six, advocacy officer for International Christian Concern, a Washington D.C.-based, non-denominational watchdog group that monitors the human rights of Christians.

“We have absolutely seen a rise (in persecution), especially over the last decade, in countries where radical Islam is growing,” he said. “There is a direct connection – almost (a) proportional connection – to the persecution of religious minorities, (which) of course includes Christians. It also includes other Muslim minorities and other faiths.”

“In 2013, things have gotten much worse in countries like Pakistan, Afghanistan, in Somalia,” said Estabrooks. “It’s a very significant challenge for Christians in those countries. We don’t see much hope for change in 2014.”

Their comments come on the heels of a major study by Pew Research that found hostility toward religion reached a six-year high around the world in 2012, noting that the “sharpest increase was in the Middle East and North Africa” as a result of the so-called Arab Spring.

The study released Jan. 14 also found Christians were the most widely harassed group.

“We see that there has been an increasing targeting of Christians,” said Andrew Bennett. “I think Christians throughout the Middle East are very concerned about the impact of various violent acts – either government-sponsored or sponsored by radicals – are having on their numbers, with Christians fleeing their historic countries where they’ve lived for the better part of 2,000 years.”

Despite concerns about the Middle East, many worry even more about the Communist dictatorship of North Korea.

“It’s consistently been the worst persecutor of the Christian faith for at least the last decade if not more,” said Six. “You’ve got an estimated 50,000 Christians or so in concentration camps there.”

He says there are hundreds of thousands more North Koreans who worship Jesus Christ secretly, while several others have been publicly executed for owning a Bible.

“The biggest issue is probably that in the West, perhaps because we think we live in a post-religious society, we underestimate just how important faith is to communities around the world and we don’t really prioritize religious freedom, and the protection of religious minorities as a human right,” he said.

Paul Johnson, executive director of Open Doors Canada, says those who are hostile to religious minorities are “emboldened” by media and government silence.

He says there are glimmers of hope that the world is paying more attention to the issue.

“In 2013, I have noticed in Canada a little more coverage in the media of Christian persecution than perhaps in previous years,” said Johnson.