One of the most difficult and sensitive areas that our clergy must deal with when non-Orthodox attend the Divine Liturgy is the "closed chalice." This refers to the teaching and practice of the Orthodox Church worldwide that only Orthodox Christians may partake of the Eucharist (or any sacrament for that matter) at our worship services. It is a simple concept, but one that seems to cause a lot of strife.
Prist Steven C. Salaris | 25 August 2009

One of the most difficult and sensitive areas that our clergy must deal with when non-Orthodox attend the Divine Liturgy is the “closed chalice.” This refers to the teaching and practice of the Orthodox Church worldwide that only Orthodox Christians may partake of the Eucharist (or any sacrament for that matter) at our worship services. It is a simple concept, but one that seems to cause a lot of strife. There are two basic reasons for this: 1) Visitors from Protestant denominations are often used to open chalices where anyone is allowed to come to Communion. This author has observed a Protestant chapel service where the pastor stated that Jesus gave his Body and Blood not to a denomination, but to his disciples. Thus, anyone who felt called to the chalice was welcomed. You could be a Mormon, Catholic, Protestant, etc. and still come to communion at this Protestant chapel. 2) The Roman Catholic Church (Latins, Melkites, and Maronites) teaches that in situation where no Roman Catholic Church is present (unheard of in this country) and/or in cases of extreme and dire emergency where no Roman Catholic priest is available (again, not likely in this country) one can seek out the Orthodox sacraments if they feel it is absolutely necessary. This has led to the misconception amongst the Roman Catholics that one can commune from the Orthodox chalice anytime they visit an Orthodox Christian Church. Let’s quickly remind ourselves why these examples are incorrect and then elaborate a unique approach to explaining our closed chalice to the non-Orthodox. 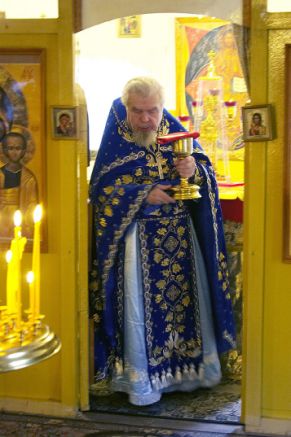 Eucharistic communion is an act of theological and ecclesiological union. Many bishops and priests that have written on this subject and the various authors all say the same thing: Eucharistic communion is not the path to, but the fruit of, of the Orthodox Church’s ecumenical work. For two church bodies to commune together means that we can look at each other and say, in all aspects, “We are one.” However, in today’s world, churches are divided along various theological and ecclesiological issues and we Orthodox do not simply “put aside our differences” for the sake of table fellowship with other Christians.

Just prior to the reception of communion, the Church recites the Nicene-Constantinopolitan Creed. We verbally confess our Orthodox belief in “…one Lord Jesus Christ…true God of true God begotten not made, of one essence with the Father…and [who] rose from the dead on the third day….” Our Orthodox beliefs do not match the beliefs of the visitor. By approaching and partaking of the Eucharist, he is making a statement that he has a common faith with us. But in reality he does not. If he partakes from the chalice then all of us are allowing that individual to make a liar of himself before God. St. Paul tells us in I Corinthians 11:27-29 that those who partake of the Eucharist without discerning the Body and Blood of Christ eat and drink condemnation unto themselves. Who among us would wish that upon a visitor to one of our churches and what judgment is upon us if we allow that to happen?

The reality of the closed chalice is not that Orthodox Christians are somehow bigoted and insensitive. Quite the opposite, we Orthodox are called to love and respect other Christians and their beliefs. In fact, we love and respect other Christians so much, whether Roman Catholic or Protestant, that we will not allow them to make liars of themselves before God by receiving sacraments in a church with beliefs that are different than their own. It is a matter of maintaining the personal integrity of those who visit our churches. The example used for this article is a bit extreme; however, the same logic applies to any Christians who have any beliefs that are not in agreement with ours – whether those beliefs are about Scripture and Tradition, Ecclesiology, the Sacraments, the authority of the bishop of Rome, the Immaculate Conception of Mary (the belief that Mary was conceived by her parent, Joachim and Anna, without the original sin that all mankind is born under), iconography, etc. The reason that there are tens of thousands of Christian denominations in this country is that there are tens of thousands of ways to believe differently from us Orthodox Christians; thus, we are not in communion with those Churches.

So, to allow a Protestant or a Roman Catholic (Latin, Melkite, or Maronite) to commune from the Orthodox chalice is making him or her state that they reject their Church’s teachings. We are inviting them to lie. That is disrespectful, insensitive, and un-Orthodox. Asking a non-Orthodox visitor to refrain from partaking of the chalice maintains the personal integrity of the visitor and demonstrates the Orthodox Church’s respect, but not acceptance, of the differences that divide us. That is respectful, sensitive, and Orthodox. Let us pray that one day the Holy Spirit, the Spirit of Truth, will bring all worshipping Christians to the True Faith so that all Christians will be one and that all may partake of the Body and Blood of our Lord Jesus Christ for the forgiveness of sins and life everlasting.