Source: Assyrian International News Agency
Sharona Schwartz | 09 July 2015
A side-by-side photo montage has emerged that purports to show what a Syrian church in Aleppo looked like before and after it was bombed. 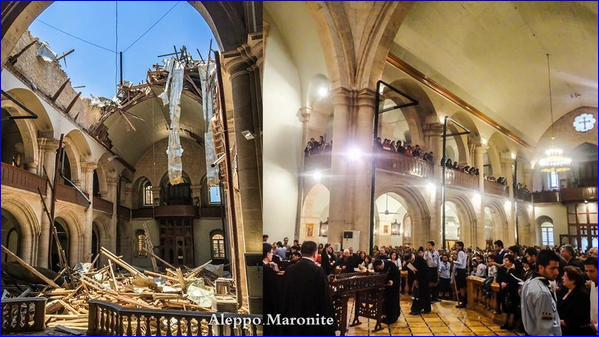 The after photo shows the church’s ceiling completely sheared off.

It isn’t known when the attack occurred or which armed force was behind the destruction in the latest development causing concern among the embattled Christian minority and their supporters overseas. Those concerns were further fueled by reports that another Syrian priest was kidnapped and that a church in Iraq was intentionally blown up by the Islamic State group.

The Custody of the Holy Land, which oversees the activity of the Franciscan Order in the Near East, said Tuesday that it had lost contact with one of its priests in Syria and feared he may have been abducted by the Al Qaeda-affiliated Nusra Front.

The Custody said Tuesday it had not heard from Father Dhiya Aziz, a parish priest in the predominantly Christian village of Yacoubieh in the northwestern Idlib province, since Saturday.

“Some militants of an unknown armed brigade, perhaps connected with the Nusra Front, came to take him away for a brief interview with the emir of the place,” the Catholic group said. “From that moment we do not have any more news and we are unable to trace his whereabouts at the present moment. We are doing everything possible to locate the place of his detention and secure his release.” The group asked for prayers for his well-being.

The Syrian Observatory for Human Rights, which tracks jihadi groups in Syria, had a similar report about the 41-year-old priest.

Agence France-Presse reported that a third group also corroborated the report of the possible kidnapping. The Assyrian Observatory for Human Rights, which tracks Christian news, said Aziz was taken from the “convent of the Immaculate Conception, where he was living.”

If he indeed has been abducted, Father Aziz would join other leading Christian figures in the area who have been kidnapped, including Syriac Orthodox Archbishop Gregorius Yohanna Ibrahim, Greek Orthodox Bishop Boulos Yazigi and Jesuit Father Paolo Dall’Oglio who have been missing for two years.

Meanwhile, the Kurdish news site Rudaw reported Tuesday that the Islamic State group had blown up the historic Mother of Aid church in Mosul in Iraq.

Kurdistan Democratic Party’s Mosul spokesman Saeed Mamuzini told Rudaw that four children who were near the church when it was destroyed were killed by Islamist militants.

TheBlaze is unable to independently authenticate the images of the Aleppo church which were tweeted and re-tweeted by Syria watchers active on social media.

Syrian government troops continued to battle rebels and an alliance of jihadist militants in the city that once was home to one of the largest Christian populations in the Middle East.