The Monastery of the Holy Cross has around 15 monks who support themselves by selling incense, soap, and candles. The monks also keep goats for milk and cheese. The monastery has it’s own repertoire of different chants applied to English texts, and so has a unique style of singing.
admin | 11 October 2006

The Monastery of the Holy Cross is situated deep in the mountains of West Virginia. It is an English speaking monastery of the Russian Orthodox Church Outside of Russia, itself being a branch of Holy Trinity Monastery in Jordanville, New York. The monastery celebrated it’s 20th anniversary this year on the Sunday after the feast of the Exaltation of the Cross. 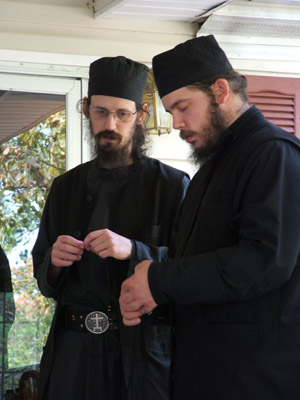 The Monastery of the Holy Cross has around 15 monks who support themselves by selling incense, soap, and candles. The monks also keep goats for milk and cheese. The monastery has it’s own repertoire of different chants applied to English texts, and so has a unique style of singing. Services are held in a small church or in a large open-air chapel. The life of the monastery is communal and the monks attend meals and services together, even though the monks live in individual cells spread out on the property of the monastery. Almost all of the monks are Americans. 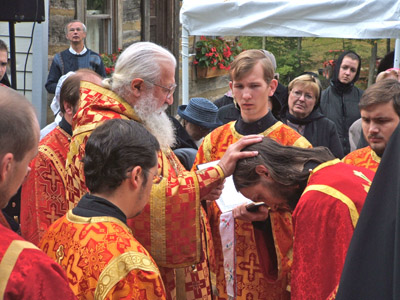 This feast was special for the monastery in many ways. Metropolitan Laurus visited the monastery for it’s anniversary and presided for the services, which were held outside on both Saturday and Sunday. The Kursk Root Icon was present at the anniversary feast, as well as the weeping icon of Saint Anna, which are both widely venerated icons of the Russian Church. Two monks of the monastery were ordained during the liturgy. One hieromonk was ordained a priest, and other monk who was tonsure just a few days beforehand was ordained a deacon. Despite the isolation of the monastery, there were many pilgrims and clergy, most of which came from neighboring states. Even though the monastery is an English speaking monastery, there were very many Russians present for the feast, and so the service was held in both English and Russian. A large group of clergy and seminarians also came to the monastery for the feast and helped with the services and the singing. 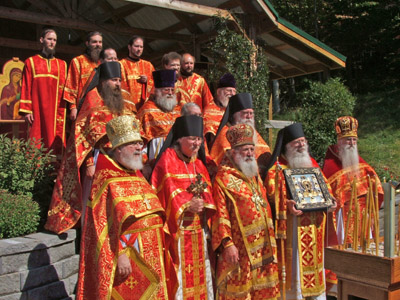 There was rain during the vigil service on Saturday, but tents were erected in anticipation of the rain, and so the service was not interrupted. Later on Sunday it was a wonderful sunny day. Metropolitan Laurus in his sermon pointed out that in scripture grace is often   associated with water, and so for the vigil grace was given to us with rain. And for Sunday grace was given to us with a bright and warm sun.

After the Liturgy a banquet was held in a nearby park. Around two hundred people attended the banquet. The food was very festive and was a great way to conclude the feast. Even though the Monastery of the Holy Cross is difficult to travel to, it provided an appropriate and graceful place for people of many background to unite in Orthodox worship of God.