Places of Prayer in Russian Schools: The Amendment Removed 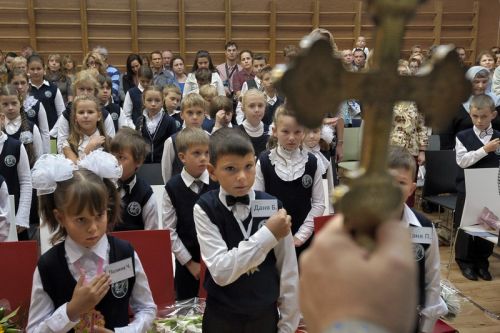 The debate continues regarding the possible presence of chapels and prayer rooms in public schools in Russia, foreseen in the amendments to the law on freedom of conscience, under discussion in the Duma. According to the website Polit.ru, the Member of Parliament Yaroslav Nilov, of the Liberal Democratic Party of Russia (LPDR), eliminated from the document’s text the proposal that worried both minorities and the more lay sectors of the Federation.

Nilov – who chairs the Duma Committee for Affairs of Religious Organizations and Public Associations – pointed out that “the issue of the so-called ‘prayer rooms’ has evoked a vast response from the public because society is heated up due to the news of rights violations in the sphere of freedom of conscience.” In order “to avoid speculation on the matter,” said the politician, the article establishing the possibility of opening worship places in institutions responsible for public education, at the request of parents and pupils, has been removed from the bill. The document has been approved, thus, in its second reading in the lower house of the Russian parliament.

In mid-November, the legislative initiative had received the support of the Russian Orthodox Church. The move seemed to harmonize, at least in part, with the program for the return of church property confiscated by the Soviet regime in the USSR and used for other purposes, such as schools. Sister Ksenia Chernega, director of the legal office of the Moscow Patriarchate, told RIA Novosti that the amendments then under discussion “did not violate the principle of the secular character of public education and the prohibition (still in place) for the construction of structures for religious associations in schools.” Sister Chernega had also recalled that spaces for prayer were already allowed in hospitals, prisons and nursing homes.

Commentators online and in the traditional media, however, had been very critical. As were some members of minority religions. According to the vice-president of the Ecclesiastical Council of Muslims of European Russia, Farid Asadullin, “public education must be separated from religion.” While the Director of the Department of Public Relations of the Federation of the Jewish Communities of Russia, Borukh Gorin, had compared the conversion of spaces and buildings to religious use to the introduction into schools a few years ago of the contested courses of “Fundamentals of religious cultures and of ‘secular ethics’.” According to him, the initiative proved useless due to the low quality of teachers of the subject. “These innovations”, he denounced, “sow religious hatred and xenophobia and sometimes even aversion to religious organizations.”