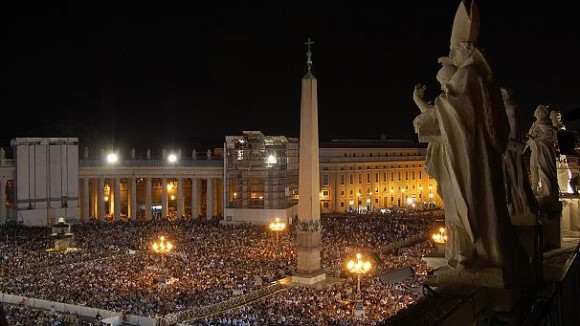 Pope Francis has led a prayer vigil for peace in Syria, a country ravaged by civil war and facing possible U.S. military action in response to the alleged use of chemical weapons by the government of Syrian President Bashar al-Assad.

Addressing tens of thousands of people at the Vatican Saturday, the Roman Catholic pontiff called violence and war the language of death. He asked the faithful gathered in St. Peter’s Square to pray for peace and reconciliation in Syria and in the rest of the world.

Pilgrims from around the world answered the pope’s call to Catholics to take part in a day of prayers for peace. Similar prayers were offered by Christians worldwide, including in Syria.

Earlier in the week, Pope Francis wrote to leaders of the G20 top world economies meeting in St. Petersburg, Russia, urging them to abandon pursuit of a military solution in Syria.

The United States, supported by France, is considering military action to punish the Assad government for an alleged chemical weapons attack on August 21 that killed up to 1,400 people. The Syrian government denies it carried out the attack or bears any responsibility for the carnage.

Syrian Christians in Damascus gathered to pray for peace Saturday in response to the pontiff’s call.

Archbishop Matta Khouri, secretary of the Syrian Orthodox patriarchate, said followers of all religious doctrines were praying, in his words “all of one heart, all the Syrians, in the churches and mosques of our different doctrines,” for peace.

At the Syriac Orthodox Cathedral in Damascus, Father Gabriel Dawood, one of the parish priests, said the faithful turned out in solidarity with the pope.

“We celebrated this divine Mass on this blessed morning to pray for Syria under the guidance of his Holiness St. Ignatius Zakka I Iwaz, Patriarch of Antioch, all the East and the Syriac Orthodox Church, in solidarity with his brother Francis, pope of the Vatican, who directed believers from all around the world to celebrate a day of fasting and praying for peace in Syria,” he said.

The deputy patriarch of the Greek Catholic Church, Joseph Absi, said Syrian Christians are praying for dialogue instead of violence.

“The relief of Syria is impossible without prayers,” he said. “When we say prayers, we mean a call to dialogue and refusing the violence and calling for peace. This is the goal of our prayer today.”

Most viewed articles
Metropolitan Hilarion Said Kuraev Could Be Excommunicated from the Church398
Statement from the Chancery of the ROCOR Synod of Bishops on Recent Events at St. Alexander Church in Jerusalem278
A Cruciform Providence126
Psalm Read at Times of Doubt, Hesitation, and Strong Temptations for Strengthening of Faith94
The Light of Christ in Christians85
Metropolitan Onuphry Speaks on True Repentance82
Moscow Priests Make Over 1,300 Visits to Patients with Coronavirus42
Metropolitan Onuphry Presents Kiev Theological Academy with a Valuable Gift41
Time and Human Life25
Most popular authors
Pravmir.com team841
Archpriest Stephen Freeman126
Metropolitan Anthony (Pakanich)94
Metropolitan Sotirios85
George Mantzarides25