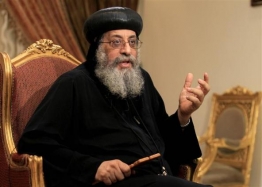 H.H. Pope Tawadros II of Alexandria has said there is pressure on Christians in the Middle East that has led to the migration of large numbers of Christians from the region.

The pope added that Egypt is experiencing tough times that would be followed by a new birth. He pointed out that Copts are deeply rooted in the land of Egypt and they reject any foreign interference in the affairs of Egypt in form and substance.

“The acts of violence against Christians in Iraq, Syria and other areas may be interconnected. There is a kind of pressure on Christians in the Middle East, and a large proportion of Christians have already migrated from Iraq,” Pope Tawadros said during an interview with Hadith el-Youm program.

He believed that wars in the Arab world aim at fragmenting the region.

The pope pointed out that Egypt is now experiencing painful times, but this would be followed by a new birth. He explained that the reasons for such a situation in the country are many and accumulated, and are not the result of the present moment.

“Poor or no competence in administering a state like Egypt has caused what we are witnessing today,” the pope noted.

He stressed that Egypt’s Copts are deeply rooted in the land of Egypt and their name is linked to the homeland, because the word “Copt” means Egyptian.

He added that some countries bear in mind that weakening the countries of the Middle East can only be carried by fragmenting the region, but Egypt is a special case, because it has historically remained a country that has not merged or been partitioned.

H. H. Pope Tawadros stressed that any foreign interference in the affairs of Egypt is rejected in form and substance, even if it is carried out under the pretext of protecting the Coptic minority in Egypt.

“We reject any protection as we are protected by our Egyptian brothers,” said the pope who stressed that terrorism is an “exception” in the life of nations and peoples, but normal life is the “original.”