Source: Daily News
The deceleration seeks “not to repeat baptism” when converting from one church to the other
Farah Bahgat | 29 April 2017 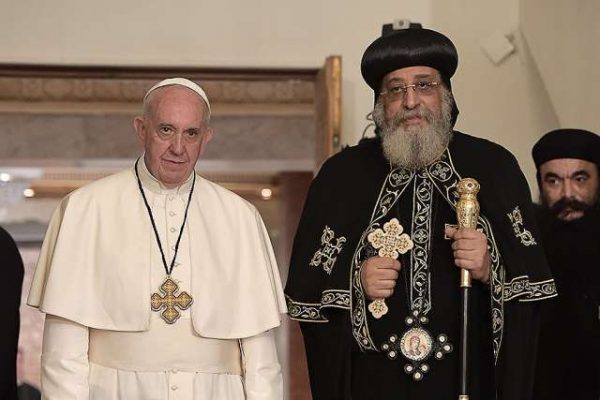 Pope Francis of the Roman Catholic Church and Pope Tawadros II of the Coptic Orthodox Church signed a declaration on Friday during the former’s visit to Egypt, agreeing that rebaptism should not be held for Christians wishing to convert from one church to the other.

The declaration, published by the Vatican, stated, “today we, Pope Francis and Pope Tawadros II, in order to please the heart of Lord Jesus, as well as that of our sons and daughters in faith, mutually declare that we, with one mind and heart, will seek sincerely not to repeat the baptism that has been administered in either of our Churches for any person who wishes to join the other. This we confess in obedience to the Holy Scriptures and the faith of the three Ecumenical Councils assembled in Nicaea, Constantinople, and Ephesus.”

Ishak Ibrahim, researcher at the Egyptian Initiative for Personal Rights (EIPR), explained that rebaptism had been one of the main doctrinal differences throughout the past 15 centuries, in which churches did not acknowledge one another.

“Baptism is considered one of the seven sacred sacraments of Christianity; it symbolises how a person is reborn when joining Christianity,” Ibrahim clarified, adding that Christians went through baptism only once in their life during their early childhood, hence, when churches did not acknowledge the baptism of one another, a person had to go through rebaptism if they wanted to transfer from the Catholic Church to the Orthodox or vice versa.

“The declaration’s importance lies in its symbolism and the message within, which shows that churches are able to coexist,” he added. “I believe that the majority of Christians will not oppose the declaration. Of course there will be opposition, but I don’t think it will result in any severe consequences.”

Researcher Marianne Sedhom from the Egyptian Center for Public Policy Studies described the consequences of the declaration as “merely theological,” explaining that it would have minimal impact on citizens but rather unified churches.

Friday’s agreement will end the previous standards that were practiced under late Pope Shenouda III, who asserted that one had to undergo rebaptism if one was not baptised in an Orthodox Church, according to state-owned newspaper Al Ahram.