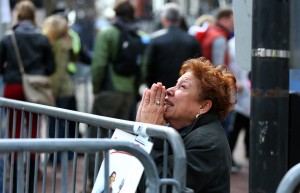 A woman prays at the scene of the explosion at the finish line of the Boston Marathon. (John Tlumacki/Globe Staff)

In two separate requests, His Beatitude, Metropolitan Tikhon and His Eminence, Archbishop Nikon of Boston, New England and the Albanian Archdiocese, called upon Orthodox Christians everywhere to pray in the wake of the bombings that marred the Boston Marathon on Monday, April 15, 2013.

“Our sensibilities once again have been shocked as two bombs were detonated at the finish line of the Boston Marathon—usually a festive occasion for remembering the early heroes of the Revolutionary War,” said Archbishop Nikon. “Well over 100 were injured. Three individuals lost their lives—among them, an eight-year-old boy named Martin, who had just congratulated his father as he crossed the finish line. In the midst of this tragedy, let us pray for all who lost their lives or were injured; for the civil authorities, law officials, and medical teams who are selflessly giving of themselves to bring about healing and restore order; and for everyone affected by these senseless acts. May our Lord comfort them—and us—as we place our faith and hope in the God Who is Love Itself.”

The text of Metropolitan Tikhon’s pastoral letter appears below.

My dear brothers and sisters in Christ,

Once again, our nation and the entire world have been filled with deep sorrow and shock following the violent bombings at the Boston Marathon on Monday, April 15, 2013. Grief fills our hearts over the loss of innocent lives, and we are paralyzed with helplessness in the face of this tragedy and the unimaginable injuries and pain endured by so many. In addition, our minds are clouded with uncertainty and with fear as we consider our own safety and that of our children and loved ones.

I ask the clergy and the faithful of the Orthodox Church in America to offer prayers for the souls of those who have lost their lives and for the healing of those who have been injured. Please pray as well for those brave police officers, firefighters, emergency responders and hospital workers who acted so quickly, and who continue to work to heal the injured and to secure of the safety of the inhabitants of Boston.

During this season of Great Lent, in which we struggle not simply to follow a physical and ascetical discipline, but also to control our passions and quiet the swirling thoughts of our minds, I ask all of us to enter deep into prayer for the world and for all mankind. Let us not become confused, frightened or judgmental in light of this tragedy. Let us not analyze or debate the causes of this horrific violence. Rather, may we have pity on those who have become so enslaved to their passions that they bring harm to their fellow man.

I especially encourage all Orthodox Christians to place their trust in God, from Whom alone the blessings of peace and consolation come. Let none among us have any fear. But let us remember the promise of our Lord Jesus Christ in the Gospel so that, in Him, we may find peace. “In this world you will have trouble,” our Lord tells us. “But take heart! I have overcome the world” (John 16:33).

May the Lord have mercy on all of us.