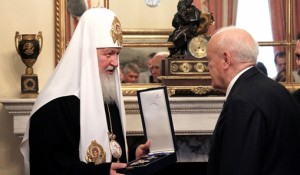 On 3 June 2013, His Holiness Patriarch Kirill of Moscow and All Russia met with the President of the Hellenic Republic, Mr. Karolos Papoulias, at the presidential mansion in central Athens.

They were joined in the meeting by His Beatitude Archbishop Hieronymos of Athens and All Greece; Metropolitan Hilarion of Volokolamsk, chairman of the Moscow Patriarchate’s Department for External Church Relations; Metropolitan Prokopios of Philippe, Neapolis and Thasos; secretary of the Greek presidential administration Mr. Georgiou; and director of the diplomatic department Mr. Pukamissas.

President Papoulias conferred a high state award, the Grand Cross of the Order of Honour, upon His Holiness.

Patriarch Kirill thanked the President for the privilege and said: “We, the fraternal nations, are of the same faith, which is a solid basis for relations of Greece with the countries of historical Rus, including Russia, Ukraine, Moldova and Belarus. I believe that any problems on our relationship will be solved in a peaceful and fraternal manner for mutual benefit. I assure you in our prayers, support and openness to cooperation for the good of our Churches.”

The President of Greece underscored the importance of Patriarch Kirill’s visit paid at the difficult time and thanked him for assistance rendered to the Orthodox Church of Greece.

Discussed at the meeting were relationship between legislative and moral standards and the present moral crisis of humanity as a prime reason of the recent financial crisis in Europe.

President Papoulias noted the importance of pilgrimage for the development of fraternal relations between nations. His Holiness added that cooperation in this field had good prospects.

Also discussed was the situation in the Middle East where, according to His Holiness, Christians are being rapidly ousted from the region. Special attention was paid to Syria, where two Christian bishops are held as hostages.

The President of Greece agreed with His Holiness Patriarch Kirill’s thoughts about the situation of Christians in the Middle East and expressed his deep concern for the people living in Syria and in other countries of the region.