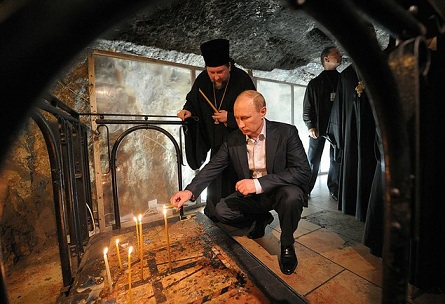 President Putin venerates the Stone of the Anointing

During the night of June 26, 2012, while on a working visit to Israel, President Vladimir Putin visited the Church of the Lord’s Sepulchre. At the church entrance, the head of the Russian State was welcomed by His Beatitude Theophilos III, Patriarch of the Holy City of Jerusalem and All Palestine, together with members of the Brotherhood of the Holy Sepulchre. Among the welcoming party were also Archbishop Mark of Yegoryevsk, head of the Moscow Patriarchate’s office for institutions abroad, Archimandrite Isidore (Minaev), head of the Russian Ecclesiastical Mission in Jerusalem, as well as his deputy, Hegumen Feofan (Lukyanov) and secretary of the Mission, Hieromonk Anthony (Gutnik).

Entering the church, Vladimir Putin kneeled at the Stone of the Anointing. It was at this place that Righteous Joseph and Nicodim laid the lifeless body of Jesus after taking Him down from the Cross and anointed Him with incense and wrapped Him in the Shroud.

After that the president was taken to the Kuvuklia, the chapel erected at the place of the three days-long burial of the Saviour.

Then Mr. Putin ascended Golgotha, the place where the Lord and Saviour Jesus Christ was crucified and after that descended to the cave in which St. Helen Equal-to-the-Apostles found Christ’s Life-Giving Cross.

President Putin presented Patriarch Theophilos with an icon of the Saviour.

In the morning of June 26, Mr. Putin came to the Church of the Nativity of Christ in Bethlehem, a Byzantine basilica with the 5th century mosaics built over the cave in which Jesus Christ was born.

In the church the head of the Russian State was welcomed by Archbishop Theophylactos of Jordan (Patriarchate of Jerusalem), who told him the story of the basilica.

Then Mr. Putin was presented with a token, a copy of the Star of Bethlehem executed by Palestinian masters.

The president lighted a candle at the place where Christ was born.

Photos by the Presidential Press Servic