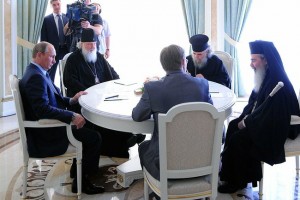 On 27 May 2013, President of the Russian Federation, Vladimir Putin, received His Beatitude Patriarch Theophilos III of Jerusalem and All Palestine and His Holiness Patriarch Kirill of Moscow and All Russia at the presidential residence in Sochi.

President Putin greeted the guests and thanked His Beatitude Theophilos for supporting an initiative to build Pilgrims’ House in Jordan. He mentioned good relations with Jerusalem and noted traditional presence of the Russian Orthodox Church there, saying also that many Russian pilgrims are visiting the Holy Land. The President expressed his satisfaction with good relations between the two sister Churches and his hope to see Patriarch Theophilos at the celebration of the 1025th anniversary of the Baptism of Russia and wished him interesting and pleasant stay in Russia.

His Holiness Patriarch Kirill thanked President Putin for the meeting that will help strengthen relations between the two Patriarchates and promote good peace initiatives of Russia in the Middle East. He underscored the importance of participation of church circles in the peace process in this land sanctified by our Lord and Saviour.

His Beatitude Patriarch Theophilos said that he considered his visit to Russia as an important and historical one. He thanked President Putin for his active interest to the Holy Land and its holy sites and for his contribution to the peace process in the Middle East.