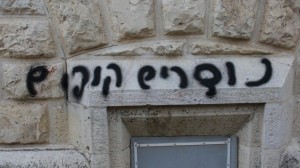 In an apparent “Price Tag” attack, vandals spray-painted epithets on the outer walls of a Jerusalem church and damaged two cars that were parked nearby overnight Thursday.

Photos released by the staff of the Dormition Abbey, which is located just outside the Old City’s Zion Gate, showed graffiti which read “Christians are monkeys” and were signed “Havat Maon,” a West Bank outpost.

The two cars, at least one of which belongs to the church, were covered in graffiti and their tires were slashed.

Though “Price Tag” attacks are generally carried out by Jewish extremists against Palestinian property, there has been at least one instance, six months ago, where vandals spray-painted defamatory graffiti on the walls of a Christian monastery on Jerusalem’s Mount Zion.

Perpetrators of such attacks say they’re retaliating for Israeli government decisions that they perceive as being anti-settlements. The attacks aim to exact a “price” for government action that the extremists oppose, like the demolition of outposts.

Later Friday, in the Arab village of Baytillu, northwest of Ramallah, the tires of three vehicles were slashed in another “Price Tag” attack. On one of the vehicles, vandals spray-painted the word “revenge.” And on a nearby wall, the words “Price Tag — regards from Evyatar” were scrawled, referring to Evyatar Borowsky, an Israeli stabbed to death by a Palestinian a month ago.

Police are investigating both incidents.

Father David Neuhaus, the Patriarchal Vicar for Hebrew-speaking Catholics in Israel, said Friday that the answer to the attacks was not stiffer punishments, but rather teaching tolerance and respecting others.

In an interview with Israel Radio, Neuhaus said that those responsible for the acts were, in all likelihood, not religious. They are nationalists who use religion as an excuse for their actions, he said.

Several ”Price Tag” attacks were carried out Wednesday morning in two Palestinian villages in the Jordan Valley, north of Jericho, and a number of neighborhoods in the capital. Those acts also appeared to be retribution for the murder of Borowsky.

“We have lost control over the settlers in some cases,” Welfare and Social Services Minister Meir Cohen of Yesh Atid said last Saturday. “We need to deal with the extremists in order to bring them back to normative behavior,” he added, responding to a recent wave of attacks.

Aaron Kalman contributed to this report.

Source: The Times of Israel