Priest murdered in a Russian village

A priest was found dead after a fire that erupted at a local church in the village of Neivo-Shaitansky near Yekaterinburg early on January 7, the day on which Orthodox Christians celebrate Christmas. Twenty-one icons, some of which date back to the 18th century, were stolen from the church.
admin | 07 January 2007 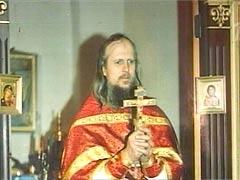 A priest was found dead after a fire that erupted at a local church in the village of Neivo-Shaitansky near Yekaterinburg early on January 7, the day on which Orthodox Christians celebrate Christmas.

The man, born in 1966, is believed to have died a violent death, local police spokesman Valery Gorelykh told Interfax. The village’s St. Peter and St. Paul Church, where the priest’s body was discovered, was apparently set on fire to hide the crime, he said.

Twenty-one icons, some of which date back to the 18th century, were stolen from the church.

Two local residents with a previous criminal record were detained as suspects in the murder, the spokesman said.

“Evidence proving their involvement in the crime was collected during the preliminary investigation. Some of the stolen icons were confiscated. The remaining icons were found in a hiding place at a local cemetery,” he said.

The priest is survived by his wife and four children.