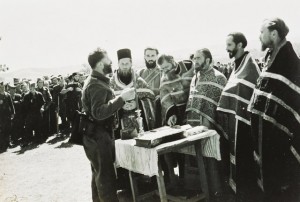 BELGRADE — The Serbian Army (VS) has reintroduced priests to its ranks this week – “after a break of 70 years,” Tanjug is reporting.

They include eight Orthodox Christian priests, a Muslim imam, and a Catholic chaplain.

The appointment orders were read at a ceremony at the VS headquarters.

Serbian Orthodox Church Bishop Porfirije and Catholic Archbishop of Belgrade Stanislav Hočevar attended the ceremony, the VS posted on its website.

The military priests will have officer ranks and will not carry weapons. They will not be in command, but they will take care of the spiritual issues of the unit they belong to and will be directly subjected to those units’ commanders as their advisers. Canonically, they will answer to their Church.

They will wear their priest robes only during religious service. The rest of the time they will wear a military uniform with markings for their respective confession.

Military priests have a long tradition in the Serbian army, including in the royal Serbian forces prior to 1918.

After the war, the Kingdom of Serbs, Croats and Slovenes had a body in the defense ministry and the navy which was in charge of military priests, and it had one first class military priest for the Orthodox, Catholic and Muslim confessions each.

The idea of reintroducing priests into the military dates back to 2000 based on the experiences of foreign armies and the Serbian tradition.

The adoption of the VS law in December 2007 allowed for religious service in the army.

The government adopted a regulation on March 24, 2011 on religious service in the armed forces and afterwards the Defense Ministry signed agreements with all the traditional churches and religious communities.