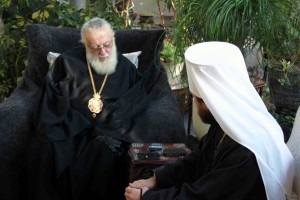 On 15 January 2013, the Georgian version of “The Sacrament of Faith” written by Metropolitan Hilarion of Volokolamsk, chairman of the Moscow Patriarchate’s Department for External Church Relations, was presented at the Patriarchal residence in Tbilisi. Attending the presentation were His Holiness and Beatitude Catholic-Patriarch Iliya II, Metropolitan Hilarion, Metropolitan Daniel of Chiatura and Sachkhere, Metropolitan Andrew of Samtavisi and Gori, Metropolitan Seraphim of Borzhomi and Bakuriani, other hierarchs and clerics of the Georgian Orthodox Church, heads and members of the faculties of the theological educational institutions, Georgian politicians, public figures and workers of culture. Archpriest Georgy Zviadadze, rector of the Tbilisi Theological Academy, read out an introduction to the book written by His Holiness and Beatitude Iliya II, Catholicos-Patriarch of All Georgia.

“Metropolitan Hilarion (Alfeyev), head of the Department for External Church Relations, occupies a prominent place among hierarchs of the Russian Orthodox Church.

“This erudite young hierarch is endowed with many talents: he is a theologian and a patrologist; he is well-informed in the history of the Church; he has composed many musical pieces.

“…The readers will be introduced to Metropolitan Hilarion’s book in their mother tongue for the first time. We believe that the book will be of great interest.”

Archpriest Georgy continued by relating Metropolitan Hilarion’s biography and concluded by saying that the book will attract of Georgian theologians and of the wide public, too.

Academician Roni Metreveli, former rector of the University of Tbilisi, congratulated Metropolitan Hilarion on the success of his book in the world theological community: the book was translated into more than ten languages. He underscored that this book was not only a good introduction to Orthodox theology, but also a wonderful teaching aid for theological schools.

A well known politician and public figure Zurab Abashidze, a former ambassador of Georgia to Russia and a special presidential envoy for relations with the Russian Federation, underscored a special role played by the DECR chairman in the strengthening of relations between Local Orthodox Churches.

Metropolitan Daniel added that the author had been acquainted with schema-archimandrite Gabriel (Urgebadze) recently canonized by the Georgian Orthodox Church and that Metropolitan Hilarion book teaches that true Orthodoxy does not know national boundaries.

Metropolitan Hilarion thanked the translator, Mr. Vladimir Chkhikvadze, and editors, Bishop Roman of Yakutsk and Lensk, who initiated the translation into Georgian, and archpriest Georgy Zviadze, who rendered aid to the publication.

Metropolitan Hilarion expressed particular thanks His Holiness and Beatitude Iliya II for introduction to the book and for an example of archpastoral ministry. DECR chairman expressed his joy over translation of his book into the Georgian language and in conclusion of his address wished peace and prosperity to the Georgian Orthodox Church and the Georgian people.