Primate of Orthodox Church of Jerusalem visits Laura of the Holy Trinity and St. Sergius 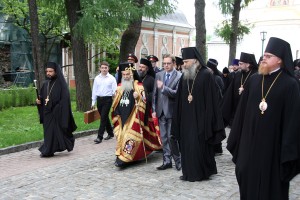 On 26 May 2013, His Beatitude Patriarch Theophilos III of the Holy City of Jerusalem and All Palestine visited the Laura of the Holy Trinity and St. Sergius and the ‘Sofrino’ Artistic Production Enterprise.

The Primate of the Orthodox Church of Jerusalem was accompanied by Metropolitan Kyriakos of Nazareth; Archbishop Aristarchos of Konstantina, secretary general of the Holy and Sacred Synod of the Orthodox Church of Jerusalem; Archbishop Theophylactos of Jordan, Patriarchal Commissioner to Bethlehem; Archimandrite Stephanos (Dispirakis), representative of the Patriarch of the Holy City of Jerusalem and All Palestine to the Patriarch of Moscow and All Russia; Archimandrite Galaktionos, hegumen of the monastery in Ramallah; and hierodeacon Athanasios (Themistokleos).

At the holy gates of the Laura of the Holy Trinity and St. Sergius, His Beatitude Patriarch Theophilos was met by Archbishop Feognost of Sergiev Posad, abbot of the Laura, Archimandrite Paul (Krivonogov), dean of the Laura, and the brethren.

His Beatitude Patriarch Theophilos and those accompanying him proceeded to the Cathedral of the Holy Trinity and venerated the holy relics of St. Sergius and shrines of St. Serapion’s Chamber. The Primate of the Church of Jerusalem prayed at the Divine Liturgy in the refectory Church of St. Sergius. In the sanctuary, he was greeted by Archbishop Yevgeny of Vereya, rector of the Moscow Theological Schools and chairman of the Education Committee of the Russian Orthodox Church.

After the Liturgy, His Beatitude Patriarch Theophilos addressed all those present with a homily.

Then the Primate of the Orthodox Church of Jerusalem met with Mr. Vasiliy Goncharov, mayor of Sergiev Posad.

That same day, His Beatitude Patriarch Theophilos visited the ‘Sofrino’ Artistic Production Enterprise. The delegation of the Orthodox Church of Jerusalem laid a wreath at the monument of Patriarch Pimen and sang ‘Eternal Memory’ to the late Primate of the Russian Orthodox Church.