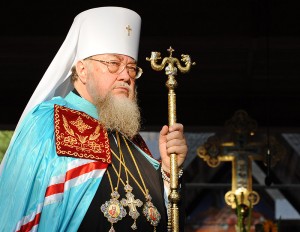 His Beatitude Sava, Metropolitan of Warsaw and All Poland, sent His Holiness Patriarch Kirill of Moscow and All Russia a letter expressing gratitude for the brotherly love and generous hospitality accorded during the celebrations devoted to the 1025th anniversary of the Baptism of Rus’. The solemn celebrations were held in Moscow, Kiev and Minsk and attended by primates and representatives of all the Local Orthodox Churches.

In his message, the head of the Polish Orthodox Church testified that ‘the celebrations manifested the power of the Russian Orthodox Church and her spiritual richness, which so effectively united us, all the Orthodox. It is a great achievement of Your Holiness’. Metropolitan Sava of Poland also noted that the solemn celebration devoted to the 1025th anniversary of the Baptism of Rus’ had ‘a tremendous importance in a broad religious-public sense for all the Slavic nations’ and for the whole Orthodox world.