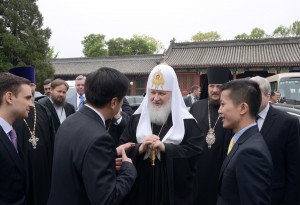 On 13 May 2013, His Holiness Patriarch Kirill of Moscow and All Russia, who is on his visit to China, met with religious leaders of the People’s Republic of China at the headquarters of the State Administration for Religious Affairs (SARA).

Participating in the meeting were also members of the delegation of the Russian Orthodox Church, accompanying His Holiness on his visit to China: Metropolitan Hilarion of Volokolamsk, chairman of the Moscow Patriarchate’s Department for External Church Relations; Bishop Sergiy of Solnechnogorsk, head of the Moscow Patriarchate’s Administrative Secretariat; Mr. Vladimir Legoyda, chairman of the Synodal Information Department; archpriest Nikolai Balashov, vice-chairman of the Department for External Church Relations.

Representatives of five religions in China warmly greeted the Primate of the Russian Orthodox Church and told him about the life of their communities.

Patriarch Kirill of Moscow and All Russia expressed his joy over the meeting with the religious leaders of China and with Mr. Zhang Lebin, deputy director-general of the SARA. His Holiness also expressed his gratitude to the Chinese authorities for their kind and cordial attitude to his visit.

His Holiness told the participants in the meeting about the Russian Orthodox Church with a large number of the faithful in Russia, Ukraine, Belarus, Moldova, Kazakhstan, and other countries.

“We consider the current level of church-state relations and of relations between the Church and society as a major achievement of recent years,” His Holiness said. “The Church plays a significant role in public discourse on all Church-related issues. We have a very fruitful dialogue with all political parties, presented in the Parliament, as well as with trade unions, and with unions of writers, scholars and composers. We have introduced several educational programs, developed cooperation with schools, armed forces and bodies of punishment execution.”

Patriarch Kirill highly appreciated warm relations between the Russian Orthodox Church and the Chinese State Administration for Religious Affairs and religious organizations of China. His Holiness expressed his particular gratitude to the representatives of the Catholic Church in China for providing church buildings to Orthodox faithful for celebrating Divine services.

“We pursue common goals based on our common religious ethics. We see dramatic moral lapse in many countries, especially in those of Western civilization. However, all laws are based on moral principles: if they are undermined, the whole system of relations between people will collapse and humanity will commit suicide. They say that personal freedom should come first, but we, the faithful, know that there is not only good in a person, but also evil. Freedom clears the way to good, but what can be done if freedom gives way to evil? We see what is going on in some Western countries: legalization of same-sex unions, support of euthanasia, ambiguous attitude to prostitution.”

The Russian Orthodox Church comes forward for a wide religious front in defense of the very life on our planet and integrity of human personality, His Holiness stated, saying, in particular, “That is why at our meeting with the President of the PRC I noted that our civilizations, the Russian Orthodox and the Chinese, had common spiritual ground. Russia, as well as other Orthodox countries, does not undermine moral principles, but, on the contrary, seeks to educate its people in high moral ideals. I believe it could be a very important basis of our cooperation, both on the bilateral and international levels. No doubt, through our common work we will contribute to the development relations between China and Russia.”