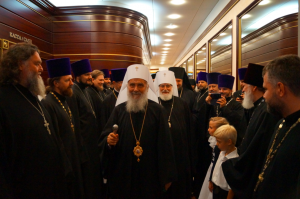 On 16 July 2013, His Holiness Patriarch Irinej of Serbia began his visit to the Russian Orthodox Church.

His Holiness and his delegation were met at Sheremetyevo airport in Moscow were Metropolitan Pavel of Ryazan and Mikhailov; Archbishop Arseniy of Istra, the first vicar of His Holiness the Patriarch for Moscow; Bishop Savva of Voskresensk, a vicar of His Holiness; archpriest Nikolai Balashov, deputy chairman of the Moscow Patriarchate’s Department for External Church Relations (DECR); archpriest Igor Yakimchuk, DECR secretary for inter-Orthodox relations; DECR staff members, Moscow clerics, Bishop Antonije of Moravici, rector of the metochion of the Serbian Orthodox Church in Moscow, and H. E. Slavenko Terzic, Ambassador Extraordinary and Plenipotentiary of the Republic of Serbia to the Russian Federation.

His Holiness Patriarch Irinej will stay in Russia till July 30.