Primate of the Russian Orthodox Church meets with President of Ecuador 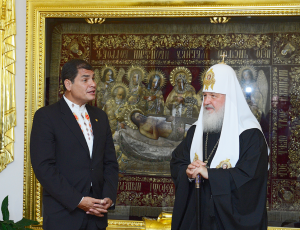 On 29 October 2013, His Holiness Patriarch Kirill of Moscow and All Russia met with the President of Ecuador, H. E. Rafael Correa.

They were joined in the meeting, which took place at the Patriarchal resident in St. Daniel’s Monastery, by Minister Ricardo Patiño of Foreign Affairs, Trade and Integration; Ms Maria Fernanda Espinosa, Minister of National Defense; ministers Rafael Poveda Bonilla, Guillaume Long, Richard Espinosa, National secretary for planning and development Pabel Muñoz ; and H.E. Chávez Závala, Ambassador Extraordinary and Plenipotentiary of the Republic of Ecuador to the Russian Federation.

The Primate of the Russian Orthodox Church greeted the high guests and mentioned his previous meetings with President Correa that took place in Ecuador in 2088 and in Moscow in 2009.

“Your ideas are close to us as well as your policy of promoting a socially-oriented economy, His Holiness said. –It is impossible to develop economy for its own sake, or for a few people to use its benefits. Such an attitude to economic development is unacceptable from the Christian point of View. The results of economic development must be available to all people. The task of the state is to smooth economic disproportions and achieve social justice. I believe that the support given to this policy by the people of Ecuador manifests their deep Christian culture and morals. I am confident that this should concern not only national, but also international economy. It is quite evident that the establishment of a just global economic order should be a priority for the international community.”

His Holiness underscored that the world economic crisis is based on the crisis of human personality, as a wish to have more money by all costs prompts people to create an unsustainable economic model.

“I sometimes see that money is a major topic in international economic news.  If people think of benefit while talking about economy, the question of how they get it becomes less and less important. This directly concerns moral state of individuals and society.

His Holiness is confident that a moral crisis could bring about any other crisis, not only in economy.

The Primate of the Russian Orthodox Church highly appreciated a courageous and firm stand of President Correa on the matters of abortions in Ecuador and his negative attitude to treating the same-sex unions as the married couples. “The Russian Orthodox Church respect freedom of personal choice, but insists that only a union between man and woman is a marriage. That is why our Church actively defends traditional moral values from aggressive liberalism.”

A Russian parish was established in Quito in 2009. “The Orthodox Russian community exists peacefully the capital of your country, His Holiness noted and added: At present, the community rents premises, but hopes to have a church building like in Havana, Cuba. A church will be a monument to the relations between Russia and Ecuador.”

The Russian Orthodox Church will support the relations between our countries and peoples in every way possible,” His Holiness underscored.

President Correa expressed his full agreement with the analysis of the current economic crisis given by His Holiness, saying that while talking about economy, one should talk about real things, such as science or production. He thinks that the fact of the Church’s speaking about this problem is very important. Capital has become more important than human beings. He believes that this is the root of the problems and considers it a challenge of the 21st century.

As to the problem pf abortions and the same-sex unions, President Correa noted that people sometimes accused him of inculcating religious views, but he was confident that this was the position of the majority. “The new Constitution of Ecuador will defend human life from the moment of its conception. We call a union between man and woman a marriage. I insist that these are not religious views, but rather human necessity and social reality. Marriage has a purpose of establishing a family, which is a cell of society,’ he added.

It is good that a parish was set up in Quito, President Correa said and noted that though his country was a secular country, it does not mean a denial of religion, but on the contrary, its acceptance and also the freedom of belief.

President Correa asked His Holiness to pray for his country and people living in it.

His Holiness believes that Pope Francis who had served in Argentina for many years will pay special attention to the problems of social justice, poverty and powerless people.  “Our Church, whose way was hard and difficult, especially in the 20th century, understands only too well the meaning of justice in society,” His Holiness said. He believes that the authorities should not forget about the major direction of their activities – to make the world a just and better place to live.

“When people tell us that morality is something acquired and therefore relative, we demolish this argument by reminding them of people’s pursuit of justice. The notion of justice is present in all cultures. People are willing to give their life for justice. This strong feeling cannot be explained by education; it comes from the very human nature.

“However, the human conscience can be destroyed, and the question arises of the role of the Church in the life of society. If the Church stops to be a courageous witness of God’s truth, she will stop being faithful to her vocation. Today, as ever before, priests should swim against the current of the rich, strong and mighty.”

The state and society should also participate in maintaining moral principles and justice in human life. His Holiness is convinced in the necessity of a broad system of international dialogue on peace and justice among representatives of society, science, education, Church, and politicians.

His Holiness noted common position of the Russian Orthodox Church and the Roman Catholic Church on this topic.  He believes that the development of Orthodox-Catholic dialogue on Christian values and a dialogue with the Catholic Church in Latin America are very important.

President Correa supports His Holiness’ ideas and underscored the necessity of a dialogue between politicians and representatives of different strata of society. He believes that we should seek justice in our activities in both social and moral spheres.