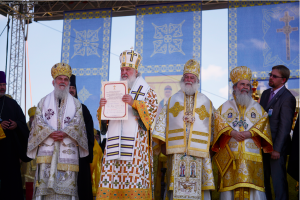 The celebration of the 1025th anniversary of the Baptism of Russia continued in the capital of Byelorussia. On 29 July 2013, His Holiness Patriarch Kirill of Moscow and All Russia, together with the Primates and representatives of the Local Orthodox Churches, celebrated the Divine Liturgy in the Minsk Old Town, where the first church in Minsk was founded in the 11th century.

Praying at the Divine Service were representatives of the Belarusian authorities, as well as tens of thousands of worshippers from all over Belarus and pilgrims from Russia, Latvia and Lithuania.

During the service, liturgical exclamations were made in Church Slavonic, Greek, Arabic, English, Georgian, and Albanian.

A thanksgiving to the Holy Prince Vladimir Equal-to-the-Apostles was said after the Liturgy.

His Holiness Patriarch Kirill of Moscow and All Russia delivered a homily on the occasion of the 1025th anniversary of the Baptism of Russia.

His Holiness and Beatitude Catholicos-Patriarch Ilia II of Georgia greeted the worshippers, saying in particular: “We cannot content ourselves with what we have achieved. We should think about the future, we should think how to preserve our spiritual and cultural values. We live in a time when everything is changing and the values can lose their significance. Our duty is to preserve our Orthodox Church and our faith. In order to preserve them, we should think about the future and about our youth… The Church needs to develop her ties with Family and School. It will help us to exert salutary influence on our youth which is beginning to understand the importance of the Church. We live in a time when our churches are full of young people and we should respond to each question they ask. May the Lord help us and grant us wisdom to guide our Churches and our people.”